4 Saints who served in the military 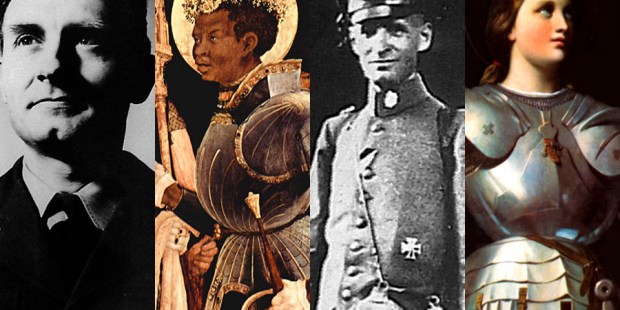 On Veterans Day we also remember those holy people who chose to be a beacon of light in the midst of war.

On November 11 each year we celebrate Veterans Day, the day our country honors military veterans who served in the United States Armed Forces. The history of the national holiday dates back to 1918, when it originated as Armistice Day.

On that day, “on the 11th hour of the 11th day of the 11th month of 1918, an armistice, or temporary cessation of hostilities, was declared between the Allied nations and Germany in the First World War, then known as ‘the Great War.’ Commemorated as Armistice Day beginning the following year, November 11th became a legal federal holiday in the United States in 1938. In the aftermath of World War II and the Korean War, Armistice Day became Veterans Day, a holiday dedicated to American veterans of all wars.”

It is a day when we thank those who have served our country, but also pray that we will some day live in a world without war.

The Catechism states, “The fifth commandment forbids the intentional destruction of human life. Because of the evils and injustices that accompany all war, the Church insistently urges everyone to prayer and to action so that the divine Goodness may free us from the ancient bondage of war. All citizens and all governments are obliged to work for the avoidance of war” (CCC 2307-2308).

At the same time the Church allows, “as long as the danger of war persists and there is no international authority with the necessary competence and power, governments cannot be denied the right of lawful self-defense, once all peace efforts have failed” (CCC 2308).

It is a tricky issue, one that the Church has had to grapple with over the ages. Throughout the years there have been many holy men and women who had to discern what the best course of action should be in the face of armed conflict. Here are four such examples of saints who, through military service, chose to be a beacon of light in the midst of war.

At a young age, Joan heard the voices of St. Michael, St. Catherine of Alexandria and St. Margaret of Antioch instructing her to “be good” and “go to church.” However, as she grew older these voices began to direct her towards the fierce war between France and England. They told her that she must help Charles VII secure the throne at Reims and even lead the French armies into battle.

Taking up this mission, Joan dismissed the camp followers — prostitutes, gamblers, and others — who distracted the disheartened army and urged the soldiers to go to confession and attend Mass. Joan’s leadership and counsel helped the French win key victories in the war. At the head of the army or in the midst of battles she carried only a banner marked with the initials of Jesus and Mary, and refused to touch a sword.

During the 3rd century Maurice rose in military rank to become the leader of the Theban legion in the Roman army, commanding more than 6,000 soldiers. According to some accounts the entire legion was composed of Christian soldiers.

When the legion was called to assist Emperor Maximian in an offensive in Gaul, the soldiers were ordered to offer sacrifices to the Roman gods. While Maurice and his men pledged allegiance to Rome, they refused to worship the false gods. Maximian at first tried to influence them by having every tenth man killed. This did not work and eventually the Emperor made the decision to kill the entire legion for disobeying his orders. Maurice and his companions were faithful to Christ to the end.

In 1914, Mayer volunteered as a chaplain during the First World War for the German army. After serving in a military hospital, Mayer requested to be sent to the lines to minister to the spiritual needs of the soldiers in battle.

Mayer would crawl on the ground from solider to soldier, administering the sacraments and offering counsel in the midst of the bloodshed. He lost his leg in a grenade attack and was then known as the “limping priest.” In 1915 Germany awarded Mayer the “Iron Cross” for bravery and was the first chaplain to receive such an honor.

When Hitler rose to power, Mayer preached against his many heinous activities and the Gestapo warned Mayer to keep quiet. This didn’t deter him and as a result, he was imprisoned several times and spent time in a concentration camp. He died after the war while celebrating Mass on All Saints Day.

Father Kapaun became a U.S. Army Chaplain in 1944 and was sent to the Burma theater to minister to the needs of soldiers in India. After a short reprieve from duty, Kapaun was sent to Japan in 1950 and then to serve as a chaplain in the Korean War later that year.

During the war, Kapaun “gained a reputation for his bravery in ministering to the soldiers in the thick of battle. During the Battle of Unsan on November 2 of that same year, he chose to remain with a number of wounded men rather than escape and was taken as a prisoner of war. Forced to march 60 miles to the prison camp in the bitter cold, Father Kapaun carried his wounded comrades and encouraged others to do likewise. In the seven months in prison, Father Kapaun spent himself in heroic service to his fellow prisoners without regard for race, color or creed, giving them help and hope when they needed it most.”

Father Kapaun was awarded the Medal of Honor posthumously in 2013 and his case for canonization is currently underway. He has been given the title “Servant of God.”