Pope Francis: “I ask poor for forgiveness on behalf of Christians who ignore them” 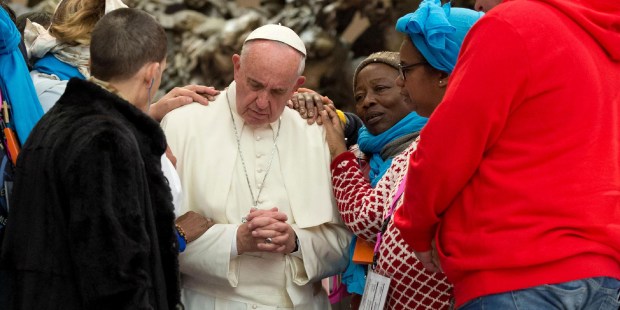 Pope Francis on Friday asked the poor for forgiveness for all the times Christians turned away when they saw a poor person or a person living in a state of poverty.

The Pope’s apology came during his audience with people who live or once lived on the streets, marking the Jubilee of the Homeless, the final event before the end of the Holy Year of Mercy on Sunday, Nov. 20.

Francis asked the 6000 poor people present in the Vatican’s Nervi Hall to teach humanity about dignity, solidarity and peace. He ended the audience with a prayer, surrounded by a group of homeless people who had placed their hands on his shoulders.

Francis spoke off the cuff, after hearing the stories of two poor people, Christian, a Frenchman and Robert, a Pole.

“One of the things Robert said was: we are no different to the greats of this world, we have passions and dreams, in some cases thousands of passions, we want to get back to the top. Passion sometimes makes us suffer, it poses an external and internal obstacle. Sometimes passion is pathological but there is also good passion, a positive passion that leads us to dream. In my opinion, a very poor man or woman can have a different kind of poverty than yours, when they lose the ability to dream, when they lose the ability to cultivate a passion. Never stop dreaming. What are the dreams of a poor or homeless person like? I don’t know, but you dream. You dream that one day you may be able to come to Rome and in this case, your dream has come true. You dream that the world will change; it is a seed that grows in your heart. You referred to a word I often use: poverty is in the heart of the Gospel. Only a person who feels they are missing something looks up and dreams. If someone has everything there is nothing to dream of. People, simple people, those who followed Jesus, followed Him because they dreamed that He would heal them and free them, and he freed them. Men and woman with passion and dreams, this is the first thing I wish to say to you: teach everyone, all of us who have a roof over our heads, we aren’t lacking food and medication, teach us with your dreams not to content ourselves and teach us to dream, starting with the Gospel, starting from the heart of the Gospel.”

The Pope then summarized Robert’s message as saying that people manage to see the beauty of life even in the worst situations. “This means dignity. This is the word that came to mind,” he said. “The ability to encounter, to find beauty even in the saddest of contexts that reflect deep suffering. Only a person with dignity can do that. Dignity is when a person is poor but they don’t drag themselves along.”

It is, he continued, the same dignity Jesus had. “He was born poor and lived as a pauper. The dignity of the Gospel, the dignity of a man and woman who earn a living. They are poor, yes, but not dominated, not exploited. I know you will often have come across people who wanted to exploit you, exploit your poverty, but I also know you have felt the beauty of life. This dignity has saved you from slavery. Poor yes, but not slaves. Poverty is at the heart of the Gospel so that it can be lived, slavery is not there to be lived but to be freed from it.”

Acknowledging that life is more difficult for the poor than for him, the Pope noted that “there is always someone who is poorer than us.”

“This is also what dignity is about: showing solidarity towards others, being capable of reaching out to those who are suffering more than we are,” he explained. “The ability to show solidarity is one of the fruits of poverty. When there is an abundance of wealth, one forgets to show solidarity, they are used to having everything. When poverty makes you suffer you show solidarity and reach out to those in worse situations than yours. Thank you for this example: teach the world solidarity.”

And yet, there is a poverty that is even greater than material want, and that is war, the Pope said, calling it a “destructive form of poverty.”

“Peace for us Christians began in a stable, a manger, in a marginalized family,” the Pontiff told the gathering. “This is the peace God wants for each of His children. Your poverty, the situation you are in, can be the starting point for your becoming builders of peace. Let the rich wage war amongst themselves, in search of more, more land, more money. It’s very sad when you witness war among poor people because it is rare. Because of their poverty, the poor are more inclined to be peace workers, creators of peace, they believe in peace. Be examples of peace. We need peace in the world. We need peace in the Church. All Churches need peace. All religions need to grow in peace because all religions must grow in peace. Each of you in your own religions can help the peace that grows inside our hearts, seeking the harmony that brings dignity.”

The Jubilee of the Homeless was organised by Fratello , an association which organizes and hosts events with and for people in situations of exclusion, in partnership with associations assisting such people. On Sunday they will attend a Mass celebrated by Francis in St. Peter’s Basilica. Between these two important events there is going to be a big prayer vigil led by the Archbishop of Lyon, Cardinal Philippe Barbarin.

Introducing today’s audience, Etienne Villemain, founder of the Lazar association which sponsored the trip to Rome, suggested the institution of a World Day for the Poor in addition to World Youth Day.