Review: “Arrival” is a captivating and cerebral sci-fi flick 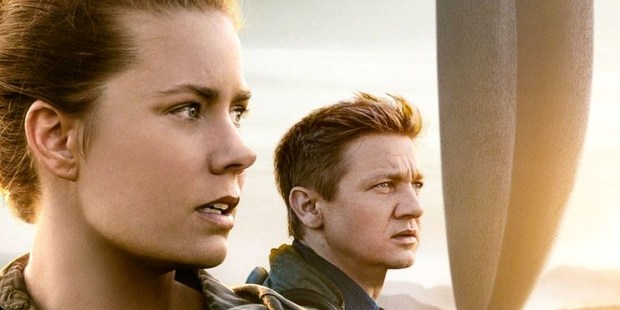 It took roughly five minutes for the man sitting next to me at the screening of Arrival to successfully remove the plastic wrapper from his box of Raisinettes. Having accomplished that Herculean task, the guy then spent the next 15 minutes or so vigorously shaking his Slurpee (not a euphemism) to ensure the contents of his cup remained at proper slurping consistency. Besides the barely contained urge to inflict bodily harm on a complete stranger this instilled in those around him, all his activity produced one other inevitable result. As the credits rolled, my noisy next-seat neighbor felt compelled to announce loudly that he had just watched one of the most incomprehensible movies he had ever seen. So, let this man’s self-inflicted confusion stand as a warning to all others. Arrival is a movie that demands a viewer’s attention, so if you plan to spend the first 20 minutes of it fiddling with your food instead of watching the screen, you will be hopelessly lost by the end.

Arrival is the latest film from Canadian director Denis Villeneuve (Prisoners, Sicario), and like his previous efforts, it is cerebral and thick with atmosphere. The movie tells the story of Dr. Louise Banks (Amy Adams), a linguistics expert recruited by the US Army’s Colonel Weber (Forest Whitaker) to help establish communications with the aliens who have suddenly parked their spaceships in 12 locations around the globe. With worldwide panic setting in, Louise and her team have precious little time to translate the guttural noises emitted by the visitors and determine the purpose of their arrival.

Aided by mathematician Ian Donnelly (Jeremy Renner), the harried doctor slowly begins to make some sense of the alien language, particularly its visual aspects. Unfortunately, her successes may prove to be too little, too late, as some of Earth’s more belligerent nations begin to threaten a more militant solution to the situation. To complicate matters, the more time she spends in the presence of the alien beings, the more muddled Louise’s mind seems to become.

As the beleaguered professor, Amy Adams turns in a nicely nuanced performance. She deftly moves in and out of the various emotions required of her character, from the fear and awe instilled by the creepy, fog-enshrouded visitors, to the confusion over her increasingly befuddled state, to the constant turmoil she experiences over the memories of her dying child and subsequent separation from her husband. It’s early yet, but Ms Adams’ performance is likely to be the first guaranteed Oscar nomination of the season. While perhaps not quite as award worthy, everyone else in the film does fine as well.

The movie’s focus on its actors is not surprising. Despite some misleading commercials, it is not explosions and narrow escapes that drive the narrative forward in Arrival, but rather ideas. There is lots and lots of time devoted to talking about the construction of language and the inherent difficulties in learning to communicate with others who don’t immediately understand us. If nothing else, it certainly adds some fresh insight into the consequences contained in the old tale of the Tower of Babel.

But there are even deeper meanings to be found in Arrival if one wishes to dig for them. Regrettably, since the mystery of what is going on is so much a part of what makes the movie so captivating, it is difficult to discuss those meanings without moving into spoiler territory. Let’s just say that if one so wishes, there are analogies to be made with what Louise experiences and what we ourselves can experience as we learn to conform our minds to that of God.

Heady stuff, I know, but it’s in the movie for anyone willing to pay enough attention. Arrival will best be enjoyed by those who have patience and like piecing together mysteries. Those looking for some blockbuster-style alien action in between mouthfuls of Raisinettes, on the other hand, well, they’re likely to leave disappointed.