Violence and the sacred do battle in “Hacksaw Ridge” 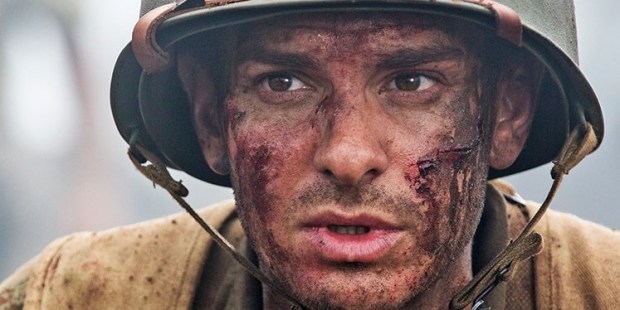 Mel Gibson’s directorial comeback, Hacksaw Ridge, is one of the most talked-about movies of the 2016. The film, which received a 10-minute standing ovation during its premiere at the Venice Film Festival, revolves around the true story of Medal of Honor recipient Desmond Doss, a “conscientious cooperator” who enlisted in World War II as a medic despite being a Seventh-day Adventist who refused to kill the enemy or even touch a weapon.

The story behind the story, of course, is the director’s decade-long blacklisting in Hollywood after a string of personal scandals. The conservative Catholic behind The Passion of the Christ was far from Hollywood’s golden boy to begin with, but these scandals and the subsequent legal battles threatened to bury his career forever.

Hacksaw Ridge, then, is Mel Gibson’s reintroduction to directing, to Hollywood, and to the world, and by all accounts is a tremendous success. This is not only a visually stunning film with a compelling storyline. It also deals head-on with themes that Gibson has wrestled with in his life as much as his art – themes of manliness, faith, self-sacrifice, and violence – in an unexpected and transformative way.

Gibson executes the first half of the story with the deliberate charm of something out of the 1940s. It may be schmaltzy, but there’s nothing not to love. We meet Doss, a gawky but endearing soul formed by his father’s trauma and the strife it introduces into their family. He becomes convinced of God’s command to not kill, and then falls head over heels in love with a pretty nurse in town. With every reason to stay put, he decides that he has to join World War II as a medic without firing a single shot at the enemy. “While everybody is taking life,” he declares, “I’m going to be saving it, and that’s going to be my way to serve.”

This beanpole pacifist from the country seems to be in way over his head. But Doss won’t quit, even as he’s taunted, scorned, and beaten by his fellow soldiers under the command of the perfectly cast Vince Vaughn. He even fights his way through a military trial meant to rid the company of this unwanted distraction.

Fast forward to Okinawa, where we join Doss’ company on a slow march up an escarpment. The tension is shattered by a blood-curdling scream from a fallen comrade, launching us into a barrage of flames, torsos, rats, heads, shrapnel, limbs, and bullets. We’re made to see in very short order why this ridge bears the nickname “hacksaw.”

Gibson described the film as a Normal Rockwell painting “jammed up against an Hieronymus Bosch painting.” “You have ideal, sweet innocence, and then you have Hell,” Gibson said during a panel discussion at the Sheen Center for Thought & Culture. “And you take the same people into the other painting. It’s the death of innocence. It’s Hell. I want to give people an idea of what that feels like, and what our veterans and indeed what the guys now, even today, they suffer… I wanted to accentuate who Desmond was in the midst of this maelstrom of violence that reduces men to the level of animals.”

All of Mel Gibson’s previous films are case studies in Girardian violence. They revolve around outcasts and scapegoats targeted by a community for sacrifice. But critics have always argued that he goes too far, and Hacksaw Ridge is no exception. Richard Brody of the New Yorker writes that there is a “a fulsome strain of pornographic violence that counteracts his movie’s higher moral purpose.”

Brody has a point. Doss’ principles don’t dovetail well with Gibson’s in-your-face depiction of violence. It’s not that he shows “too much” of war’s carnage, or shoots it in slow motion with a heavy-handed score. It’s more that the gore-fest starts to take on an absurd, haunted-house flatness reminiscent of Tarantino or even Sam Raimi. There’s a missed opportunity there: A more integrated film could’ve filmed all this carnage in such a way that it underscores Doss’ convictions. Gibson doesn’t really do that; he just throws the battle and Doss side by side.

But that’s not such a bad thing after all. In fact, it might be part of what makes the film so intriguing. Bilge Ebiri at the The Miami New Times is right when he calls this a film that’s at war with itself, about a man at war with himself, by a man at war with himself. Doss’ heroic pacifism is a big question mark smuggled into the heart of a bloody film about a bloody battle. His fellow soldiers didn’t quite know what to make of it, any more than the viewer – or the director of Braveheart – knows. But there it is: Doss “the coward,” saving dozens of lives on a wing and prayer, carrying his Bible and begging God to save one more, even if it’s the enemy. It’s a bomb no one saw coming. Like Christ, he reveals the world’s violence – and love of violence – to itself.

Speaking with EWTN, Gibson explained that it was this message of a non-violent warrior who “overrides” the world’s conflicts that drew him to the story. “It wasn’t about enmities or sides or anything else. It was about love. He’s just overriding the system, or the accepted thing. It’s like with the election. You have to override this stuff. You have to get your head above this because it’s a tragic joke.”

The film may not bend over backwards to show Doss’ beliefs, but it absolutely does all it can to show his valor. And maybe what Mel Gibson did here is really a very simple (and timely) thing. Even if it contradicts itself in the process, Hacksaw Ridge re-enshrines an ideal of manhood built not on the ways of the world – arrogance, conquest, and revenge – but on the ways of faith: total humility, self-sacrifice, and love.

That’s a story worth spreading.