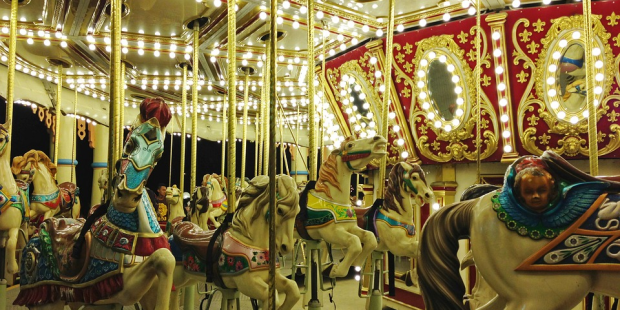 “I have to sit down. My leg just broke again.”

52) With a few other people at your church, plan a party and invite all those from “the highways and byways” to come.

We recently wrapped up our annual fall festival at my parish. As a few of us stood around talking, one of my Vincentian brothers (from the St. Vincent de Paul Society) brought us a throw-back moment. “Hey, Larry, remember the festival when you helped that kid, I think his name was Jake? You were sitting there with him and you both were crying. I’ll never forget that.”

Like a dam exploding, memories flooded back. I had been transported over 15 years without even trying. Jake … oh man, was that a Sunday to remember.

“Of course I remember Jake,” I told my friend. “How could I forget him? And no, I never knew what happened to him or the family.”

Every year during the Fall Festival I would compile a list of families the Society had come in contact with over the years(s) who had young children. I would contact them and ask them to meet me at one o’clock on Sunday, near the “big tent.” Then I had the privilege of distributing wristbands to anywhere from 12 to 20 children, which allowed them to ride the attractions free and eat, drink and be merry all day, right up until closing at 9 p.m. This particular year we would also get to meet Jake and his sister, Nancy. It became one of those days you never forget.

It was Thursday morning and a call came into our office from a young woman who was in desperate need of some assistance. Her power had been turned off, her water had been turned off, she had two young kids and needed food. When you’re a mom and your kids are asking for something to eat and you have nothing to give and you cannot even turn on the TV for them, trust me, you are having a lousy day. My wife and I (we were a home-visit team) left within 10 minutes of getting the message.

Getting the electricity and water reconnected was easy. Bringing groceries over and giving mom a food voucher to get perishable items at the local supermarket was easy. Finding out that Jake, her youngest child, suffered from a disease called Osteogenesis Imperfecta, otherwise known as “Brittle Bone Disease,” was a different thing altogether. That was unfixable. That was a permanent life challenge this young, single mom and her kids were living with every day of the year. Sometimes life is very hard for people.

Jake was seven years old and the simplest low-energy impacts could cause one of his bones to break. His arm was in a sling as he was recovering from “another” broken arm. I asked his mom if she could bring the kids to the Festival on Sunday and she was so happy she started to cry right then and there. She said that just to get her boy on the merry-go-round would be a thrill for him. My wife hugged her and told her everything would be all right. We left knowing their A/C was running (this was Florida) the lights were on, the TV was blasting and the water was running. Most importantly, there was food and drink in the house.

Sunday arrived and I distributed the wristbands and food coupons to the other kids I had called. I asked Jake, Nancy and their mom (I’m a bit embarrassed but I cannot remember their mom’s name) to wait for me in the parish hall. This way Jake would not have to stand and wait. About 15 or 20 minutes later I went inside and met them. The mom asked me if I would mind staying with Jake as she had to take Nancy to the bathroom. “My pleasure,” I said.

Jake and I walked over to the door. There was a step about four inches down, like a curb, from the parish hall floor to the concrete walkway outside. Jake was holding my hand and, as he stepped down the tiny distance, he groaned. I was startled and looked down at him. “You okay, Jake?”

“No Larry, I have to sit down. My leg just broke again.”

I was absolutely stunned. All the kid wanted to do was go on the merry-go-round. I sat down with him and he started crying. He was just a little guy and I had my arm around him and then I was crying and all these people were walking this way and that … and he says to me, “Don’t worry, Larry, it’s all right. This happens all the time. I just wish Mommy did not have to go to the hospital today. She wanted to go on that merry-go-round with me more than anything.”

Jake loved his mom so much that he did not give a damn about his broken leg. He was more worried about Mommy. Ten minutes later they were on their way to the emergency room.

Shortly thereafter they moved to North Carolina. I do not know what became of them. I do know this, I will always remember Jake and the unconditional love he had for his mom.