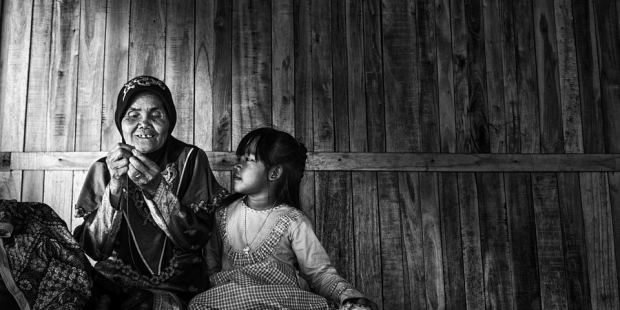 November is a month to remember those whose faces we no longer see. It is as much about telling the next generation about those you’ve loved as it is about recognizing, one day, you will be part of the stories told to children who have never seen your face. During this month, I try to tell a different story about someone who has passed on. I want my children to have the family lore.

I love that they all know the tale of their great-grandfather who never had to do dishes at camp because he never badmouthed the food. His fellow cowhands didn’t like that he never did KP, so they laced his eggs with Tabasco. The story goes that he took a bite of his dinner and jumped up saying, “Boy, that’s hot!” and the whole crew fell silent. He winked and added, “But it’s just the way I like it.” And the camp exploded with laughter.

I love that they know the story of my uncle, who never passed up a chance to make a joke, even when it was imprudent. Their father had declared bedtime to the three sons crammed in one room. “I don’t want to hear another peep!” he thundered. Uncle Pat said, “Peep! Peep! Peep!” and his two older brothers joined in, leaving their father to shut the door on a chorus of peeps punctuated with giggles.

I love the stories because they reveal flesh and bone and feelings to what are otherwise black-and-white photos, static shots of a reality they’ve never known. They teach my children to use humor to solve problems.

The same is true for us as adults, as we discover the lives of the saints. Until we come to hear their words and see their stories, they can remain as static as statues. We need to know they moved through time and struggled. To reach holiness was not boring or easy; it was heroic and hard. If I want my children to know their own family because I want them to know where they come from, then I should all the more want them to discover the saints so they can know, where we all want to be going.

Fortunately, we have recent saints like Pope John Paul II and Mother Teresa to reveal to this generation that saints are not relics of a prior world where there were no cell phones or computers or space stations or cars. Anyone who delves into the lives of these two modern saints finds the wisdom needed for our age: how to care for the suffering, how to speak about the dignity of life, and how to die to one’s self, and never surrender one’s convictions for an easier option more palatable to others. They provide all of us who are seeking to show our children an image of what wisdom is, and truth and beauty, and a life lived for Christ. And it isn’t something miserable, boring or repressive. It is strong, it is demanding, and it is earth shattering.

So spend some time this month showing your children the photos and sharing the stories of your family so they touch the roots that nourished so much of who you are, and then, introduce them to saints who will act as guides for where they will go.

Then, take them outside and play baseball or go for a hike, or do something silly, so that one day, when they’re sharing the stories, you get to be the one starring in the cool memory and the funny line that everyone remembers come November.