Mercy begins in the mind 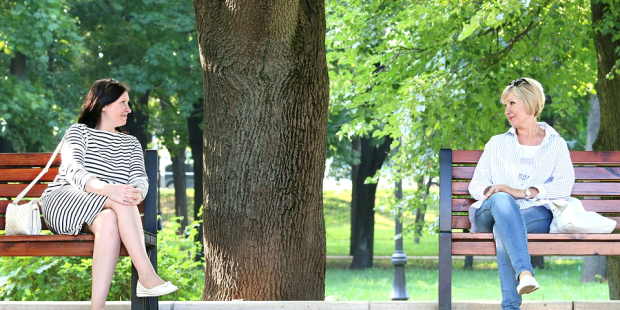 I’m writing for the cranky, the annoyed, the judgmental, the suspicious and peevish, the reactive, for those who have many buttons others can easily push. I’m writing for me, perhaps you, and for many people I know, who would like to be a lot more merciful than we are.

Let me begin with a story.

The church had the classic New England white clapboard sides with the tall clear windows and simple steeple. It sat on a country road, set against trees. It was the Baptist-y church of a 1950s movie, filled with friendly people fond of potluck suppers and hymnsings. Friends brought me, a secular-minded teenager, and I got to know it well.

A young woman came to the Saturday night youth group and to church on Sunday. She was astonishingly beautiful. Almost right away, two little old ladies straight from a 50s movie, short, plump, white-haired, with light blue eyes and apple cheeks, campaigned to drive her away. I was still an outsider and even I heard one of them say, “She’s no better than she should be,” and heard others say the same kind of thing.

They succeeded in driving her out. No one stood up to old ladies full of malice. It was a country church made up of locals, and everyone knew this girl had been sexually abused by her father since she was a little girl. I heard years later that her life had not gone well. I wonder how it might have gone had she been welcomed into a small, loving community of Christians, rather than driven away as dangerous goods.

The poor girl’s persecutors argued that she might be promiscuous and might seduce the boys. She was a slut, a bad girl. She was a type, not a person. And it was her own fault. She was no better than she should be.

I don’t think this would happen today. Not because the old ladies would be less malicious, but because people know better what sexual abuse does to children. We know more of their story. Few would now say “It’s her fault. She’s no better than she should be.”

Inspired but not helped

The writing produced during the Year of Mercy inspired and convicted me, but it wasn’t always very helpful. The writers assumed that stories of people being merciful would get us lesser mortals to feel merciful. I need less optimism, more direction, because being merciful to people you actually know can be really hard.

Fortunately, mercy begins in the mind, as well as in the heart. The mind can pull open the closed heart. You may have had this experience: You’re thinking “What a jerk” about a difficult person and then someone tells you what the man’s gone through. You start thinking, and feeling, “poor guy,” and feel bad for calling him a jerk. You happily give him what help you can give him.

We should show mercy to everyone spontaneously even if we don’t know their stories. Jesus expects that, which is why he told the parable of the Good Samaritan. But in real life, as sinners among other sinners, as people inclined to selfishness dealing with people inclined to annoy us, few of us can.

Knowing their stories helps a lot. How can this be made practical? Here are three things I try to do.

First, meditate on how much mercy I’ve received. Which is, as you know, boatloads. In his book The Name of God is Mercy, Pope Francis says: “The more conscious we are of our wretchedness and our sins, the more experience the love and infinite mercy of God among us, and the more capable we are of looking upon the many ‘wounded’ we meet along the way with acceptance and mercy.” For me, this includes examining my conscience for the sin of judging and including it in my confession.

Second, learn people’s stories when I can. Many people want to talk. Listening can be an apostolate in itself. Francis says: “Mostly people are looking for someone to listen to them. Someone willing to grant them time, to listen to their dreams and difficulties. This is what I call ‘the apostolate of the ear’ and it important. Very important.” Reading stories about other people’s lives helps a lot.

Third, assume that the difficult people have a story even when I don’t know it, and that story would make me feel merciful if I knew it. I try to apply the Golden Rule: Think and speak of them as I want strangers to think and speak of me. I want everyone to say when I act badly, “He must have his reasons” or “We don’t know what he’s going through.”

Had the people in that church done these things, even if they remained ignorant of the effects of abuse, they would have welcomed a girl who needed them. Their listening might have broken their prejudices and helped them show mercy they didn’t feel. They might have changed her life. They might have saved her life.