When the crucifix makes you want to look away, remember this old writer’s rule 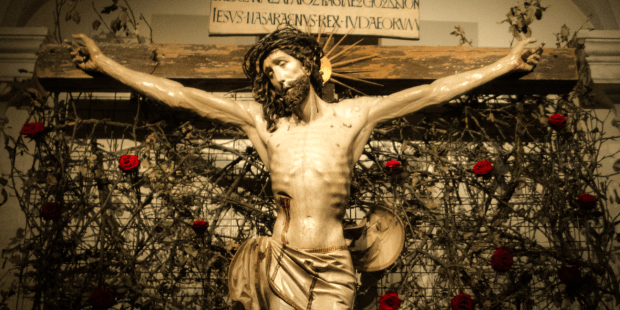 There’s an old rule for fiction writers, and really, for anyone who wants to express something important in a powerful way: “Show, don’t tell.”

I first encountered this rule studying Tolstoy, whose protagonist in “The Snowstorm” is going on a journey in Russia at night. He describes how “a current of cold air began to flow from some opening into my sleeve and down my back,” and just reading it gives me the shivers, as much for the perfection of the phrase as for the perfect specificity of the image. Good old Tolstoy. He could have used a string of intensifiers and adjectives, telling you “the man was very cold, extremely, excruciatingly cold,” but if he takes you by the hand into that Russian night and shows you that cold, he doesn’t need to tell you. The experience is immeasurably richer than the words that could have described it.

Nowadays, I think of “show, don’t tell” every time I look at a crucifix. I haven’t always been comfortable with even looking at a crucifix. When I was younger, the crucifix was just another decoration in a church that I didn’t give much thought.

A close Protestant friend of mine once asked me whether Catholics believe in the Resurrection. We were teenagers, and she had just accompanied me to Mass. I realized how striking and maybe even disturbing it might have been to her to be confronted with the gigantic, realistic crucifix up front, which I was so used to I hadn’t even thought to forewarn her of. I think she wondered how, if we believe in Christ’s Resurrection, we could be putting so much emphasis on the disturbing image of His dead body.

Later, when it began to dawn on me what the crucifix meant, there was a period of months in my life where I found it almost too hard to look at one directly. Even now, on a bad day, it can be hard. Christ is just so exposed, so vulnerable, and I don’t like to be reminded that “Whoever serves me must follow me; and where I am, my servant also will be. (Jn 12:26).” And where He is is exactly where I don’t want to be. I want to be His servant, sure, but I don’t want to go all the way to the Cross. But, of course, there can be no resurrection without death first. It’s no good hoping for one without the other.

The crucifix is particularly confounding, because it’s supposed to be a sign of Christ’s utter, all-encompassing love for us—but at the same time, He is calling us to participate in that suffering, and that doesn’t seem to have anything at all to do with love. And He isn’t sugarcoating what He is asking of us, either. His pain, humiliation, and helplessness is obvious. I have found myself asking, “You say you love me, but You want me to hang there on the cross with You? I wouldn’t wish that on my worst enemy.”

Read more: Keep the crucifix before your eyes and it will teach you everything.

This is where I’ve found comfort in remembering the “show, don’t tell” rule, looking at a crucifix. Christ spent His years of ministry telling and telling and telling us that He loves us, that we must love each other, be meek, be like a grain of wheat, and die so as to produce fruit. And maybe we listened, a little bit. But His death, the very heart of what He came to tell us, and the means by which He “destroyed death forever” isn’t telling—it’s showing. It’s every single thing He said, and the expression of the completeness of His love, all brought together into a single image. It works on us in a way that words don’t.

Of course it’s confounding. His message is about as unwelcome to us as His death. We don’t really want either. But the fact that He wasn’t content to just tell us about that love, the fact that He wanted to show us, and that the Church puts the crucifix, tortured corpus and all, in such a prominent spot in every church, shows us that whatever death and pain and horror there are in our own life, Christ is there experiencing it as well; and together, by His cross, we can make it to the Resurrection too. He would never be content just to tell us about His love. He shows us, so we can really believe we are not alone. As uncomfortable as it still makes me, I am becoming daily more grateful for the gift of the crucifix.