In Ireland, a Celtic cross grows in a forest 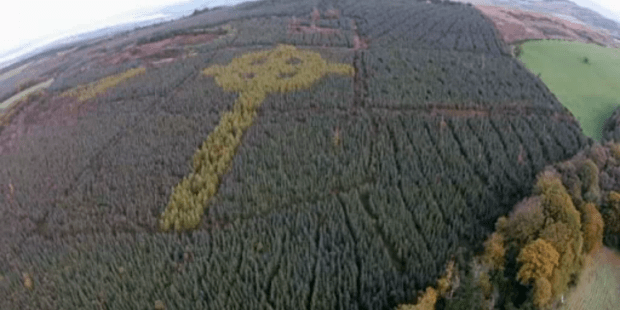 The ancient symbol, seen only from the air, is the result of meticulous planning

A visitor to Ireland would expect to see the Celtic cross, that ancient symbol where a ring is superimposed over cross bars. But now, folks flying over a certain area of the Emerald Isle may see it in an unusual place.

For a few years, air passengers on approach to the Derry City airport have reported seeing the Christian symbol embedded in a forest—the design made out of trees with a lighter hue than those of the background.

It turns out that the natural cross, which measures approximately 328 feet by 230 feet, was the result of meticulous planning on the part of a local forester.

ITV, a television station in County Donegal, discovered recently that the designer of the unusual sight was Liam Emmery, who passed away in 2010 after suffering brain damage in an accident.

“For Liam to have created that and to give the gift of that to the rest of us, we’re going to be appreciating this for the next 60 or 70 years,” Austin told ITV.