The Presentation of Mary: Celebrating something that never happened 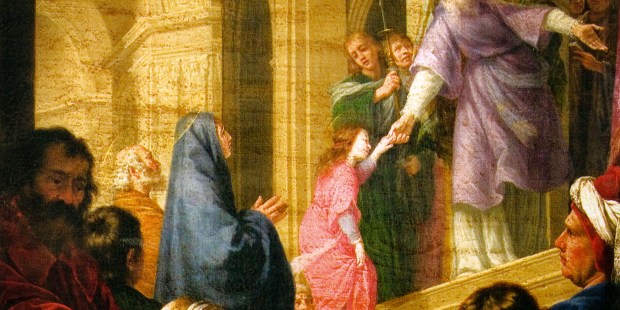 Mary calls me back to where I most want to be: to the heart of God which, as you know, is also the heart of the world. She calls me to let the passion of Jesus become my passion and his glory to become my glory. She calls me to move beyond the dos and don’ts of the morally correct life into an intimacy with God where I can live the sadness, pain, and anguish of this world while already tasting the gladness, joy, and peace of the glorified Lord.
—Henri Nouwen

Several years ago, I was attending daily Mass with a community of Benedictine monks. After making the Sign of the Cross and extending the greeting, the celebrant declared, “Today we are celebrating something that never happened.” It was November 21, the Memorial of the Presentation of the Blessed Virgin Mary.

The name for this particular feast of Mary is based on a tradition found in the Protoevangelium of James. This is an early Christian text which was circulating at the end of the second century and which became enormously popular in the Middle Ages. “Protoevangelium” means “First Gospel” and in this text we find stories about events that took place before the birth of Jesus, and special attention is given to the birth and childhood of Mary. It is in this “gospel” that we find the names of Anne and Joachim, the parents of Mary. We also find many details surrounding the birth of Jesus that are absent from the gospels of Luke and Matthew.

According to the text, Mary was offered to God in the Temple by her grateful, aged parents when she was three years old. This was done to fulfill a vow that Anne had made when an angel appeared to her, telling her the she would become the mother of a child who “will be spoken of throughout the entire world” (Pr. James 4:1). When the appropriate time came, the child Mary was presented in the Temple and received by the priest, who blessed her, saying, “The Lord has made your name great for all generations. Through you will the Lord reveal his redemption to the children of Israel at the end of time” (7:2). The text goes on to describe how, when the priest set Mary on the third step of the altar, God cast his glance down upon her and she “danced on her feet, and the entire House of Israel loved her” (7:3).

The images of this quaint and unusual story remind us of Psalm 45:10-15:

Listen, my daughter, and understand: pay me careful heed. Forget your people and your father’s house, that the king might desire your beauty. He is your Lord: honor him, daughter of Tyre.

All glorious is the king’s daughter as she enters, her raiment threaded with gold; in embroidered apparel she is led to the king. The maids of her train are presented to the king.

Despite the details provided by “James,” liturgists and Scripture scholars are quick to point out that the story of Mary’s presentation in the Temple is not based on actual events: there is no historical evidence that daughters were ever offered to God in the Temple (although firstborn sons were). And if we look at the readings and prayers that the Church uses in the liturgies for this celebration, we immediately notice that no mention is made of this story from the apocryphal Protoevangelium of James.

In fact, what we are celebrating each November 21 is the anniversary of the dedication of a church, St. Mary “the New,” in Jerusalem. Dedicated on November 21, 543, the church was located on the southern side of the Temple Mount. That original building was destroyed in 614 following the Muslim conquest of Jerusalem. Today, the Al-Aqsa Mosque stands on the site. Whatever its origin, this special celebration of Mary on November 21 is an official part of the Church’s prayer… so, what can we learn from the Memorial of the Presentation of Mary?

For centuries, members of certain religious communities have renewed their vows of poverty, chastity, and obedience on this day, as a way of honoring the memory of the offering of Mary to the Lord’s service. As Saint Augustine says, “The blessed Mary certainly did the Father’s will, and so it was for her a greater thing to have been Christ’s disciple than to have been his mother, and she was more blessed in her discipleship than in her motherhood. Hers was the happiness of first bearing in her womb him whom she would obey as her master.”

Each of us, as members of the Church, can imitate Mary in this mystery. God has called all of us, in our baptism, to dedicate ourselves to lives of service through our work and prayer. And Mary, as the icon of a perfect disciple, is the model of obedience to God’s will. Remember—through her Fiat, her “let it be,” at the Annunciation—she set out on a path that took her away from the security of home, family, and tradition, into a life of service to the God whose handmaid she was to become. As Pope Francis has reflected, “She who was blessed because she believed, sees blossom from her faith a new future and awaits God’s tomorrow with expectation.” In the end, each of us, like Mary, must pray for the courage and faith to continue along the paths God has mapped out for us, if we are to become the kind of disciples we are called to be.