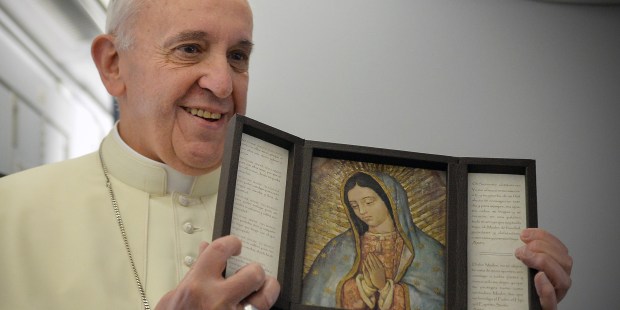 VATICAN CITY ‑ The Blessed Virgin Mary will be at the heart of the themes for the upcoming World Youth Days, the Vatican announced today.

According to a statement released by the Vatican’s new super-dicastery for Laity, the Family, and Life, the themes for the next three WYDs (2017-2019), all taken from the Gospel of St. Luke, are as follows:

These are the themes chosen by Pope Francis for the three-year World Youth Day journey that will culminate at the international celebration of the event to be held in Panama in 2019.

“The spiritual path indicated by the Holy Father continues the reflection that started with the last three WYDs (2014-16) when the themes were focused on the Beatitudes,” the statement read.

“As we know, Mary is the one that all generations call blessed (cf. Lk 1:49). In Pope Francis’ prepared address for the meeting with WYD volunteers in Krakow, he spoke of the disposition of the Mother of Jesus and described her as a role model to be imitated. While speaking without notes on that occasion, the Holy Father invited young people to have memory of the past, courage for the present and to have/be hope for the future.”

“The three themes announced above are intended to give a clear Marian tone to the spiritual journey of the next three WYDs,” the Vatican explained. “At the same time they give a picture of young people on a journey between the past (2017), present (2018) and future (2019), inspired by the three theological virtues of faith, charity and hope.”

“This path that is being proposed to young people can also be seen to be in harmony with the reflection that Pope Francis has entrusted to the next Synod of Bishops: Young People, Faith and Vocational Discernment,” the Vatican said.