John F. Kennedy, a kid from the Bronx and a moment in time 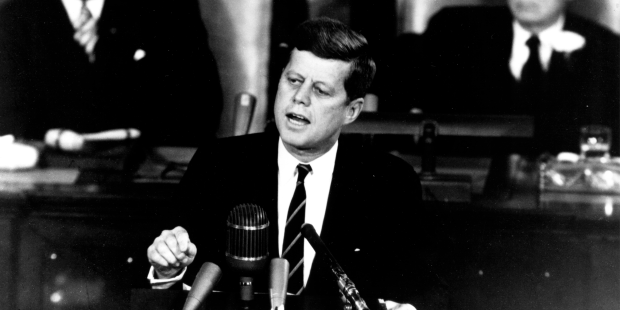 On the 53rd anniversary of JFK’s assassination, Larry Peterson remembers his brush with the then future president of the United States.

“The president is dead.” For those of us who can remember those words from 50 years ago, they are seared into our brains like letters sand-blasted into a granite headstone forever: clear, succinct, and unmistakable in meaning. How could this be? Things like this did not happen, especially in the America of 1963. But then a few days later, John-John, in his little top coat and short pants, saluted as the caisson went by holding his dad’s body covered by our flag. It was real all right, no doubt about it.

I had a personal connection to John Fitzgerald Kennedy. Just like the moment when I heard of his death, these moment(s) are also seared into my brain, and the memories of them are as clear and vivid as if they happened 10 minutes ago. The only difference is these are my moments with JFK. No one else ever had these moments, just me and the 35th president of the United States. Let us go back to November 5, 1960.

The most famous hotel in the Bronx was the Concourse Plaza Hotel on the corner of 161st Street and the Grand Concourse. Built in 1922, it was an elegant 12-story hotel three blocks from Yankee Stadium. Many of the Yankees had stayed there, including Babe Ruth, Mickey Mantle, and others. On Saturday, November 5, 1960, Senator John F. Kennedy was to deliver a campaign speech at the hotel. His fateful election to the presidency was now only four days away.

I had an after-school job delivering groceries and stocking shelves for Harry “the Grocer.” I worked for Harry every day after school until 6 p.m. and on Saturdays from 10 a.m. until 6 p.m., and frequently delivered to the Plaza. A number of elderly tenants lived there year round, and they always called Harry when they needed anything. I would bag up the stuff, load it into a cart, and push it up the two hills to the hotel, often twice a week.

One Friday, I made a delivery to the eighth floor and the customer told me that Senator Kennedy was coming in the morning to give a speech. She was very excited about it and told me she was going to make sure she was down in the ballroom when he arrived. Knowing I had to work, I assumed I would not see him, and was pretty disappointed.

That night my friend “Sticks” talked about it, and we decided we should just go up there about 9 a.m. the next morning. We got there closer to 9:30, arriving through the rear loading dock, as I would do while working. It was a bit strange because there were no cars or trucks, or anything or anyone for that matter, at the rear of the hotel that morning.

Sticks hurried ahead of me and went through the door so fast I lost track of him. I hurriedly walked down a short corridor and made a left. I can remember that it was quite dark. I made the turn and froze dead in my tracks. Someone else had also stopped short.

The man I had almost walked into, and who was now looking me in the eye, was Senator Kennedy. We were less than a foot apart. He had finished his speech and was leaving via the rear entrance. He was with another man. That was it. No one else was there. Just me, John F. Kennedy and some other guy. The other man simply stepped near me and said, “Excuse us, son.”  I said nothing and stepped back. Senator Kennedy smiled at me and said, “Good to see you.” Then he and his friend walked down some stairs and exited the door that led to 162nd Street.

The rear stairwell was right in front of me, so I ran up a half flight to a platform and opened the big window. I looked out, and below me and maybe 50 feet away the next President of the United States was standing next to a limo, just talking to his companion. There were no police, no guards in the street, no one else.

He was wearing a dark blue topcoat that had to be very expensive, and his face had a perfect tan, something you do not see in New York in November. His thick, sandy hair was blowing a bit, and he ran his right hand up and across it. Then it happened. He looked up at me, smiled (I can still see his teeth) and held up his hand. He did not wave it, he just held it up with his fingers spread apart. He probably held it up for about two seconds.

He was saying good-bye to me, a kid from the south Bronx who just happened to be there at that moment. I held up my right hand to him and I guess I smiled. Then he got into his limo and was gone. I watched as my new friend’s car turned onto the Grand Concourse. Talk about a “moment in time.”

I guess I smiled.