The strategies of Satan, Part 2: The “Ahab” tactic 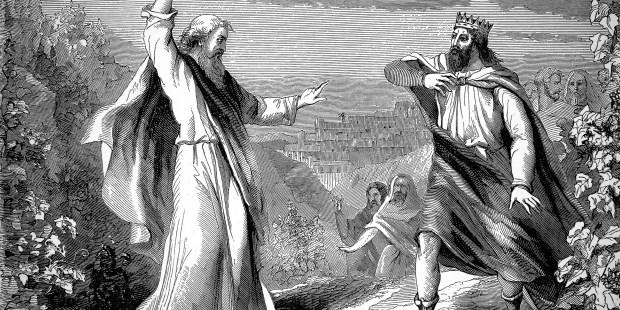 Second in a series on spiritual warfare: The satanic attack that exploits our passivity, weakness and shame

“…there was no one like Ahab, who sold himself to do what was evil in the sight of the Lord, urged on by his wife Jezebel.” (1 Kings 1:25)

We read in 1 Kings that Ahab was king of Israel, with a calling to be the righteous protector of the people and nation entrusted to his care. He failed and Israel suffered. A true king is a wise warrior who offers his people protection and vision; said another way, a true king gives his people boundaries that may not be crossed and horizons that must be reached. Without protection, the vulnerable suffer, and without horizons, the people wither.

How does this affect us? We live in the age of democracy, not monarchy, and I doubt that any reader of this column is a head of state. Nonetheless, all Christians are called to do what Ahab failed to do: All are called to protect the people and truths entrusted to our care by God; all are called to obey when God’s anointed prophet speaks; all are called to resist evil, whether evil whispers its seductions or shouts its demands.

Hesitant, passive, weak—Ahab fails to act when he should, and Israel suffered. When we fail to act, people entrusted to our care will pay a terrible price.

Ahab was more than passive—he was also selfish, brooding, spiteful and crafty. When he couldn’t get his way, like a petulant child he sulked, refused to eat, and stayed in bed, with his face turned to the wall. (1 Kings 21:4) Childish, Ahab was also shrewd. He knew that his passivity and selfishness provided a perfect environment for his wife, Jezebel—a master manipulator, seducer and schemer—to operate. Theirs was a match made in hell. He surrendered his morality and authority, she usurped his power and prerogatives, and both got what they wanted. He got what he could not earn, and she obtained what she did not deserve. Wherever a Jezebel operates, there’s an Ahab allowing it to happen. Remember: The abdication of God-given authority (like Ahab) is just as sinful as its complement, which is aggressively hijacking the authority of others (like Jezebel).

What’s the moral of the story? What can we learn about Satan’s strategies by studying Ahab’s self-defeating passivity and Jezebel’s destructive aggression?

Ahab’s pattern goes back to Adam in the Garden of Eden. There, Adam surrendered his God-given authority, failed to stand up to evil, shifting blame to his wife, Eve. (Genesis 3:12) He didn’t act according to who he was and he didn’t act according to whose he was. In the first instance didn’t accept his office as steward of creation and husband of Eve. In the second instance, he didn’t live according to his identity as the crown of creation, made in the image and likeness of God. Thinking like an orphan, rather than as a son and heir, he believed the lie of the serpent that God did not have the best for him. Lacking confidence in God’s love and fearing conflict with Eve, he took the easy way out—capitulating to her and trying to hide from God. All creation paid the price.

The satanic Ahab strategy works on those lacking a firm grasp of their identity as beloved children and heirs of a loving Heavenly Father. Insecure, hesitant, drowning in shame, worthlessness and discouragement, these wounded souls crave human approval and worldly consolations. And the Jezebel spirit has an unerring eye for detecting the wounds of an Ahab spirit, and a boundless capacity to exploit them.

What recourse does the wounded Ahab spirit have? How can we serve those we love who suffer and hide as an Ahab spirit? We can intercede for them and affirm them, of course. But eventually, the wounded and craven Ahab spirit must accept the person and promises of Christ.

We see in Matthew 4:1-11 Jesus battles Satan, who would have Jesus forget the Fatherhood of God. Satan would have Jesus believe that fulfillment can only be had in surrendering God-given authority in exchange for the things of this world. Jesus doesn’t yield. He rebukes Satan, and the tempter flees from Jesus. The good news of Christian revelation is that Jesus shares his God-given authority and victory with us. As adopted children of God, the enemy has no right to oppress us. Refusing to be passive (like Ahab), refusing to be aggressive (like Jezebel), we can like Christ assert our identity and authority as heirs to the Divine Kingdom. We must never forget that!

When I write next, I will discuss what is perhaps the most insidious satanic strategy of all. Until then, let’s keep each other in prayer.