4 Catholic coaches who led their teams to greatness 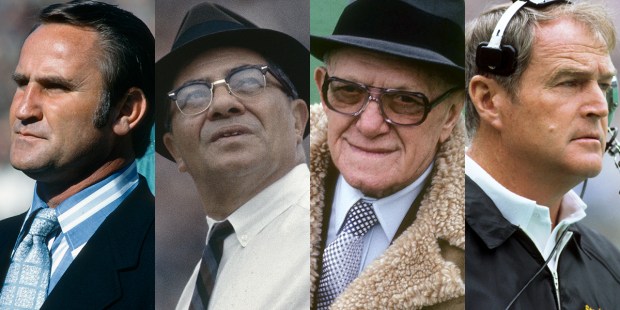 It’s all about priorities, as the great Vince Lombardi taught: God, family… sports

At first glance, faith and professional sports would appear to contradict each other. Football in particular is a sport that some view to be at odds with the Catholic faith on account of its violent nature. Yet, Catholics have been a central part of the success of football from the very beginning. Some of the most influential coaches in the history of the NFL were practicing Catholics.

Football, of course, is not inherently evil. Playing professional football is morally neutral territory. What the football player or coach needs to remain focused on is a sense of priorities. As legendary coach Vince Lombardi once said, “Think of only three things: your God, your family and the Green Bay Packers — in that order.” What is important is making sure that God is given primacy, followed by your family and then (and only then) can football hold a place in your life.

As the first coach to win the Super Bowl, Lombardi not only has a trophy named after him; many regard him as the best coach of all time. As the head coach of the Green Bay Packers during the 1960s, Lombardi led the team to five total NFL Championships in seven years, in addition to winning the first two Super Bowls in 1966 and 1967.

Throughout all of that he maintained his daily habit of going to Mass before attending meetings and kept a Bible and a Missal on his nightstand. Lombardi prayed daily to St. Anthony and St. Jude and kept an old black wooden rosary in his coat pocket, which he would finger throughout the day. He was also known to have been an altar boy, and frequently went to confession. While he wasn’t perfect, Lombardi strove to put his Catholic faith above his profession.

Not only is Halas called the founder of the Chicago Bears, he is also considered one of the co-founders of the National Football League. Halas won six NFL Championships as head coach and won more than 300 games in his career.

In 2008, Sports Faith International inducted George Halas into its “Sports Faith Hall of Fame” for his steadfast Catholic faith and prayer life. His grandson Patrick McCaskey (currently a co-owner of the Chicago Bears) related the faith of his grandfather in an interview with Zenit, saying, “Once in a speech I heard him say: ‘Sixty years ago I offered my heart and my helmet to the Lord. My heart is still beating and my helmet still fits. I pray the Divine Coach finds me worthy to be on his first team.’ He didn’t always talk about his faith, but he lived it very strongly. He always went to confession, coming back to his desk to say his penance, and to Communion. He encouraged his family to do the same.”

Best-known for his coaching career with the Miami Dolphins, Shula led the team to two Super Bowl victories and the only perfect season in the history of the NFL. Shula in his 36-year career had only two losing seasons and holds the NFL record for most wins as a head coach.

Born and raised Catholic, Shula once considered becoming a priest. He told People, “I once seriously considered the priesthood myself. But then I decided I couldn’t be a priest and a coach too.” While he never became a priest Shula lived religiously, something he learned from his parents. According to Fathers for Good Shula once said, “We never missed Mass… Even today, I try to attend Mass every day. … Attending Mass and looking to God for guidance aren’t just habits for me. They matter deeply to me. … It makes a real difference to me when I start off each day by giving thanks and asking for help from God. … There’s something good about kneeling down, asking for help, and listening for answers.”

Noll was a force to be reckoned with in his day, coaching the Pittsburgh Steelers for 22 years and leading his team to four Super Bowl wins. His number of Super Bowl wins is currently tied with Bill Belichick as the most by a head coach in NFL history. Noll is best known for the “Steel Curtain” defense and is regarded as one of the best coaches of all time.

Noll is remembered as a faithful Catholic, who tried to influence other people in a positive way. Brian Rooney (a member of the Pittsburgh Steelers’ Board of Directors) said in an interview, “I remember as a young boy, after every game — no matter how big — the team would come into the locker room, take a knee, and recite the Lord’s Prayer. Only after the prayer would Coach Chuck Noll, another man of great Christian faith, say his post-game comments.” At Noll’s funeral in St. Paul’s Cathedral, Bishop David Zubik said in his homily, “It didn’t matter how important you were, or how valuable you seemed to be in society, in his eyes, everybody was important. That was the first and only time I ever met Chuck Noll. But he made a difference in my life, just like he made a difference in the lives of so many others.”