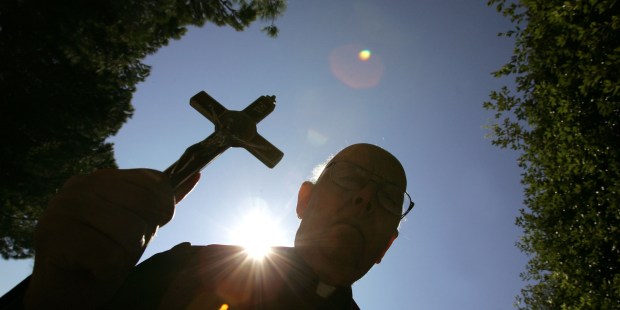 Most people have never witnessed a live exorcism, of course, but one might wonder if the director of the most famous movie about that religious ritual had seen one.

The answer is, he hadn’t. William Friedkin turned William Peter Blatty’s book The Exorcist into the celebrated film in 1973 and successfully scared the hell out of millions of viewers. But he had never seen a real exorcism performed.

Friedkin writes about it in the latest issue of Vanity Fair, and the title of the piece “The Devil and Father Amorth: Witnessing the ‘Vatican Exorcist’ at Work,” is a reference to two of the most famous adversaries in recent history: one, who’s been around for a long, long time, and the other, a man who wrote many books about his experience cleansing people of the devil.

That would be Father Gabriele Amorth, chief exorcist of the Diocese of Rome until his death earlier this year.

The exorcism—of a woman in her late 30s named Rosa—took place May 1, Father Amorth’s 91st birthday. Friedkin describes a priest who walks from room to room with a cane and struggles to get up from kneeling at prayer, but still rises at dawn and spends six hours answering correspondence from all over the world, using a fountain pen and licking each envelope and stamp. The priest died four months later.

“As with traditional psychiatry, the patient is usually not ‘cured’ after the first session,” Friedkin notes. “Father Amorth had been exorcising one man for 16 years.”

Soon after beginning the ritual, it became clear just how entrenched the possession was.

A low buzzing sound began, like a swarm of bees, as the others in the room prayed quietly. “SPIRITO DEL SIGNORE. SPIRITO, SPIRITO SANCTO SANCTISSIMA TRINITA.” (God’s spirit, Holy Spirit, Holy Trinity. . . . Look after Rosa, O Lord, destroy this evil force so that Rosa might be well and do good for others. Keep evil away from her.)

Father Amorth called out the satanic cults, the superstition, the black magic that had possessed her. She reacted, growling, and screamed “MAAAAAAIIIIII!!!” The scream filled the room.

Another voice from deep within her shouted in his face: “DON’T TOUCH HER! DON’T EVER TOUCH HER!!” Her eyes were still closed. Father Amorth yelled, “CEDE! CEDE!” (Surrender!)

She reacted violently: “IO SONO SATANA.” (I am Satan.)

The buzzing continued. Rosa grew more defiant and agitated. The room was cold, but everyone was sweating.

After the procedure, Friedkin asked Rosa if she felt better after the exorcism. “Each time, it feels like I’m becoming free,” she said. “I can feel the Devil suffering inside me.”

Friedkin, who identifies himself as an agnostic, writes that, 45 years after his movie came out, he wanted to see “how close we who worked on the film came to reality or to discover that what we created was sheer invention.”

And for that, he also consults several medical experts, who view his videos of Father Amorth and offer their own agnostic reactions.

Friedkin’s account takes an ugly turn toward the end, and Rosa’s story does not have a happy ending. At least not yet. Father Amorth is gone, and the Devil is tenacious and capricious. The reader is left to hope that Rosa finds her way to another exorcist with just as much resolve.