Castro and the 3 Popes who defended dignity in Cuba 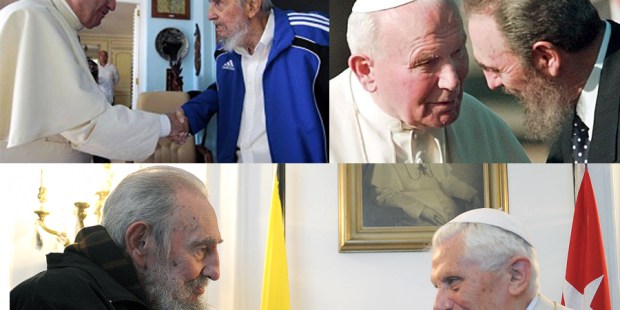 John Paul II, Benedict XVI and Francis each had a turn inviting Fidel to an encounter with Truth

Fidel Castro, the leader of Cuba’s Communist revolution, died Saturday night. He had turned 90 in August.

Castro became the prime minister of Cuba in 1959 when he led a successful overthrow against Fulgencio Batista; he then took the title of president in 1976. In 2008, he turned over the presidency to his brother Raul, who tonight announced the death of the “commander in chief of the Cuban revolution.”

As the leader of Cuba’s Communist party for such a long tenure, Castro had the attention of the last several pontiffs — he took over Cuba under the reign of John XXIII.

But particularly the last three popes have addressed Castro’s policies and the situation of Cuba.

Pope John Paul II made the first papal visit ever to the island. The Polish Pontiff, who knew all about bringing down oppressive regimes, arrived in Cuba for a five-day tour in January of 1998, departing the island on the feast of the Conversion of St. Paul.

The Holy Father celebrated four public Masses, and had meetings with youth, bishops, and other groups.

In his final address, he spoke clearly against the US embargo. But he also called for respect for religious freedom: “the Cuban spirit must ever show its trust in God, its Christian faith, its ties to the Church, its love for the culture and traditions of the homeland, its vocation to justice and freedom. In the process of doing precisely this, all Cubans are called to contribute to the common good in a climate of mutual respect and with a profound sense of solidarity.”

At the end of his address, he spoke off-the-cuff about the rain that was falling, saying it brought to mind the Advent song “Rorate Caeli,” which quotes Isaiah: Let justice descend, you heavens, like dew from above, like gentle rain let the clouds drop it down.

“This rain during the last hours of my stay in Cuba may signify an advent,” John Paul said. “My wish is that this rain will be a good sign of a new advent in your history.”

John Paul II and Castro had a 50-minute private meeting during the trip, a follow-up to an earlier meeting they’d had in the Vatican in November 1996.

Seven years later, the Polish Pontiff reiterated the same message when a new Cuban ambassador was sent to the Holy See in 2005 (the Holy See and Cuba never broke diplomatic ties). John Paul again criticized the embargo but also requested religious freedom, specifically that foreign priests and missionaries be allowed to enter the island nation, to minister to its majority Catholic population.

Then it was Benedict XVI’s turn to take on the touchy Cuban situation. He made his own visit to the nation in 2012, but before that, his secretary of state, Cardinal Tarcisio Bertone, visited the island in 2008, to mark the 10th anniversary of John Paul II’s landmark tour.

Bertone arrived just a day after Fidel announced he was turning over the presidency to Raul, giving extra significance to his trip.

“Cuba is proof that dialogue, if it is sincere, always gives fruits,” Bertone had said before leaving for Cuba, in reference to Vatican-Cuba relations and the enduring challenges in the country.

Benedict’s visit to Cuba was his last international trip, in a tour that included Mexico.

It fell to him to continue reiterating the same message.

In a homily at Revolution Plaza, he stressed that truth is an “unavoidable condition for attaining freedom.” It gives us a foundation for an ethics that can bring together “different cultures, peoples and religions, authorities and citizens, citizens among themselves, and believers in Christ and non-believers,” he said.

“Christianity, in highlighting those values which sustain ethics, does not impose, but rather proposes Christ’s invitation to know the truth which sets us free.”

Benedict and Fidel had a 30-minute private meeting. According to a report from Vatican Insider at the time, “the revolutionary atheist showed a keen interest in religious questions, ‘interrogating’ Peter’s successor. He followed Benedict XVI’s apostolic visit on television and noticed some variations in the liturgy since his younger days. So the Pope explained how mass had changed.” Castro also reportedly requested that the Bishop of Rome send him some books on faith.

All of this set the stage for Francis’ behind-the-scenes work in the same vein, which led to the thaw in relations between Cuba and the United States, announced at the end of 2014.

President Barack Obama said much of the credit for the improved relations should be given to Francis. But those watching the history of Vatican-Cuba relations knew that Francis’ own gifts were lent to a continued effort to put pieces into place.

Francis’ 2015 visit to North America included both Cuba and the United States, and he met with Fidel personally in what the pope later described as “less a formal meeting than a spontaneous one.” The Holy Father spoke with Fidel about his experience being educated in Jesuit schools in Cuba, and a Jesuit friend of the president’s, as well as Laudato si’.

Aside from these themes, “we did not talk about the past,” Francis said in answering a question about if Fidel showed any signs of regret. “Regret is something very personal, a matter of conscience,” the pope said.

BBC noted that in April, Fidel had made a public appearance at the end of the Communist Party congress.

The leader of the revolution knew that death wouldn’t be far off. “To all our turn must come,” he said.