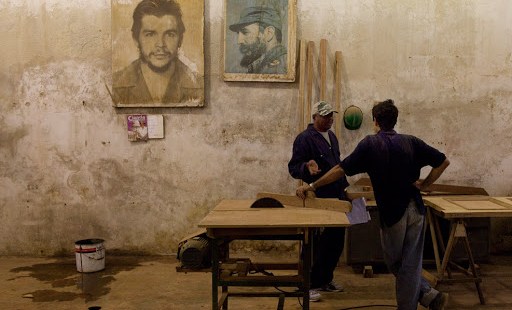 Let us pray for his soul, and for the people of Cuba

It is being announced that Fidel Castro has died at age 90. Writes the BBC:

Fidel Castro, Cuba’s former president and leader of the Communist revolution, has died aged 90, state TV has announced. It provided no further details.
Fidel Castro ruled Cuba as a one-party state for almost half a century before handing over the powers to his brother Raul in 2008. His supporters praised him as a man who had given Cuba back to the people. But his opponents accused him of brutally suppressing opposition.

I confess to knowing little about Castro beyond the fact that he overthrew Havana and imposed upon the Cuban people the ironic “freedom” of Communism — ironic because what is compelled of people rather than volunteered by them lacks purity at its foundation:

The communal theory can bring an abundance of riches and a wealth of liberty, but only when each individual first surrenders them both, and not to anyone on earth.

I recall the grainy black-and-white news reports; Fidel with a cigar. Kennedy and the Bay of Pigs. All I know of Castro is connected to stories of refugees moving across the water on any flotation device available, to get away from Cuba — to come to America, and breathe the free air. All I know of Castro is that people wanted to get away. Friends who left Cuba as children, and have grown up never having met large parts of their families — aunts and uncles unable to get out — are surely feeling conflicted tonight: happy that the weight of history is passing, yet called as Catholics to pray for his soul.

And that is all we can do at this moment, until more is known, and formal words are spoken, and the representatives of nations gather and move through the ceremonials: Pray for the soul of Fidel Castro; pray for the salvation of his brother, Raul — this is the best and most generous prayer we can make for all men and women in secular seats of power. Pray for the people of Cuba, and for the reunification of families long separated.

It is interesting to look back at Pope Francis’ visit to Cuba, last year. His words to the people on poverty: his praise of the matriarchs who have “kept the light of Faith”; his off-the-cuff exhortations to the youth.

You can look back on all of Francis’ remarks in Cuba, and related stories, here.

Our Lady of Charity of El Cobre, pray for us, and for the people of Cuba.