Repentance isn’t about you 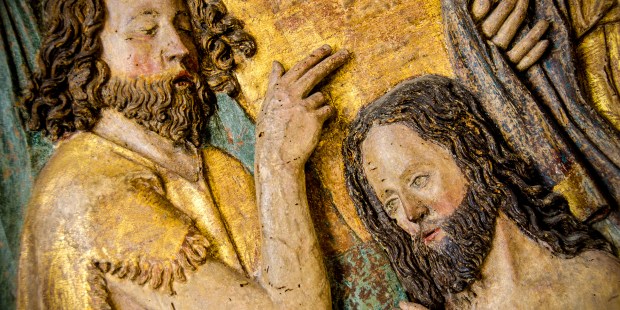 I cannot think of him in any other way except as “Old” John the Baptizer. But he was only in his early 30s at the outside, a bare six months older than his cousin, Jesus. But he is old to me, rangy and as ancient as everything else in Israel.

Charlton Heston’s movie role as the Baptizer is stuck in my head, that’s the problem. Gritty, grimy, dressed in scratchy camel hair, stealing honey from African killer bees, gobbling down hapless grasshoppers, looking like some Stone Age Neanderthal prophet clubbing people with their sins — there’s John, gone crazy-mad with axe fever, itching to launch himself into a pyromaniacal rage.

Dipping his water-puckered hands into the Jordan River time after time, he washes sins off “vipers,” and from “stones” that pretend to call themselves children of Abraham. Hear him? How can you not, yelling away about the axe and the fire and the wrath of God soon coming upon Earth?

With breathless panic “the crowds asked (John), ‘What then should we do?’”

Can you picture them, all those people listening to Old John, hunkered down in front of the 1st century’s version of How to Survive the Coming Wrath? And the questions tumble out.

And the answer is: Nuthin’.

Got that? That’s pretty much what he says, as I read it. None, not one of his answers focused on the person who asked, “What must I do?”

Instead, all his answers centered on what must happen for someone else, if we’re talking “fruits worthy of repentance,” as he put it.

There’s an interesting twist. There is nothing you may do for yourself. Instead, there is everything you can do for your neighbor.

Like what? Like, live charitably. Collect honest taxes, no more than necessary. Do not use a public trust to extort money.

Can you imagine a happy land like that? A place where tax collectors collect no more than prescribed? Clothing bins for the poor are overflowing, and soldiers expect no more than their pay and do not ask for baksheesh.

None of those people could. That’s why they needed a John the Baptizer to remind them of the fruits of their repentance.

Old John’s version of Doomsday isn’t about doom at all. In fact, it turns out to be about the “one who is coming.” He’s the one. He will do it. He will baptize you with the Holy Spirit and he’ll put a fire in your belly. You wait and see if he doesn’t.

God sends the Christ, who gives his life for us each. It is this and this alone that gives life to the world. We can’t strive for it. It is given. We don’t earn it. It is free. It is not about “us” getting. It is about him giving.

The way of God is totally opposite from what we expect, even maybe from what we deserve. It contradicts how we experience life. “Tell me what I must do.” And instead I am pointed gently to a neighbor. I am moved beyond my own expectations.

Henry Thoreau’s notion of those who “march to the beat of a different drummer” is fetching. But here’s Old John banging on a whole different drum set.

That is our situation as the Church of Christ on a sojourn in this place. Life around us has this steady pace of what’s expected.

But John’s pounding an expectant beat, and Jesus will arrive with a sweeter rhythm: Life is a gift. The kingdom is free. Christ is on our side. Grace and mercy have the last word. Look after each other.

Even now he is tapping out the sounds that measure our steps to this Table where his Body and Blood mark the dimensions of our need and his gift.