The cross Mother Teresa loved and carried with her 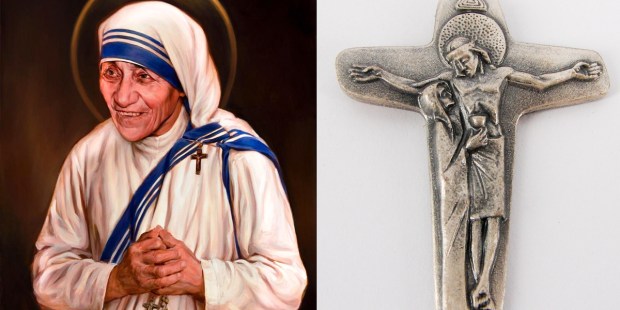 Created by a Schoenstatt seminarian, it ‘best expressed what she and her community wanted to do’

It’s not too easy to see, but the official canonization portrait of Mother Teresa depicts what’s known as the “unity cross” on her rosary.

The unity cross is linked to the Schoenstatt movement, as it was created by the first generation of Chilean Schoenstatt seminarians who studied in Brazil and Switzerland.

The unity cross depicts Jesus on a low cross, enabling Mary to be pressed against him, as she collects his blood in a chalice which is at the center of the image.

According to Schoenstatt, the unity cross was crafted by Fr. Angel Vicente Cerró, when he was a seminarian. It was finished in 1960 and presented at the Schoenstatt Shrine in Bellavista, Santiago, Chile.

The original image is now in the Schoenstatt Shrine in Stuttgart, Germany.

Monsignor Peter Wolf explains that “Mother Teresa found [a replica of] this cross in the dirt on the street and knew nothing of its history. She discovered it again when she visited the Vatican and saw that it was the pectoral cross of Archbishop [Francisco] Errázuriz [of Santiago, Chile], who was then the Secretary of the Congregation for Consecrated Life. Mother Teresa told him that this cross best expressed what she and her community wanted to do: Like Mary to stand by the Cross of the Dying Christ and to meet him there. The Archbishop, later Cardinal, then gave her hundreds of copies of this Unity Cross for her Sisters.”

Cardinal Errázuriz is a priest of the Schoenstatt Fathers, serving from 1974 as the community’s Superior General. In 1990, he was appointed secretary of the Vatican’s congregation for religious. In 1998, he was made archbishop of Santiago, Chile, retiring in 2010.

In fact, Cardinal Errázuriz has himself explained how it was that Mother Teresa was given copies of the unity cross for her sisters:

The memory of the conversation with Mother Teresa of Kolkata about the Unity Cross remains engraved perfectly in my memory.

(When I worked in Rome) she attended the Congregation for the Institutes of Consecrated Life and Societies of Apostolic Life to speak about a new Institute of priests she was founding. Their centre would be in Tijuana, Mexico. This would be their Kolkata (many people from Central America and Mexico flocked to this town after having left their homes and sold everything they had to cross over the border into the United States. They were unsuccessful and succumbed to immense poverty).

When she greeted me and saw my pectoral cross, which is a copy of the Unity Cross, she slightly lifted the jacket she was wearing over her sari and showed me a small Unity Cross that she always carried with her. (She didn’t say anything about the origin of the cross she carried.) She added: ‘Here is the Mother of God together with the Poorest of the poor.’

As she said goodbye, she asked me if I could get 3,000 crosses because she wanted every Sister of Mercy to have her own. I wanted to give them this gift. I found enough donors and we bought them in Mexico. I sent them to her.”

A pendant-sized unity cross is available at Amazon.com, here.

Read more about the unity cross at Schoenstatt websites, here: