Pope Francis: Faith is not a philosophy, but an encounter with Jesus Christ 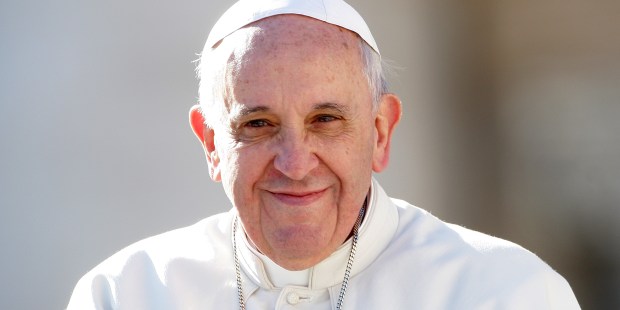 © Franco Origlia/Getty Images
VATICAN CITY, VATICAN - FEBRUARY 14: Pope Francis attends a meeting with engaged couples from all over the world gathered today, on the feast of St. Valentine, in St. Peter's Square on February 14, 2014 in Vatican City, Vatican. During the event, organised by the Pontifical Council for the Family, Pope Francis emphasised that living together is 'an art, a patient, beautiful and fascinating journey' which can be summarized in three words: please, thank you and sorry. (Photo by Franco Origlia/Getty Images)
Share
Print
Aleteia | Nov 28, 2016

Sounding a lot like his predecessor, pontiff tells us Advent is a time to “go forth to meet the Lord…”

VATICAN CITY — The Christian faith is not a theory, philosophy, or idea, but an encounter with the person of Jesus Christ, Pope Francis said this morning at Holy Mass at his private chapel in Santa Marta, as the Church enters into Advent.

In order to truly encounter Jesus, the pope said, we need to undertake this journey, remaining vigilant in prayer, diligent in charity, and exultant in praise.

The Advent liturgy presents several encounters with Jesus, the pope said: with His Mother in the womb, with St. John the Baptist, with the Shepherds, and with the Magi. All this, he said, shows us that Advent is “a time for journeying and going forth to meet the Lord, that is, a time to not stand still.”

Prayer, charity, and praise: ways to encounter the Lord

And so we must ask ourselves how we can go forth to meet Jesus. “What are the attitudes that I must have in order to encounter the Lord? How must I prepare my heart for the encounter with the Lord,” Pope Francis asked.

In the prayer at the beginning of the Mass, the liturgy points out three attitudes: vigilance in prayer, diligence in charity, and exultancy in praise. That is, I must pray with vigilance. I must be hardworking in charity – fraternal charity, not only giving alms, no; but being tolerant of the people who annoy me, being tolerant at home of the children when they make too much noise; or of one’s husband or wife when they are difficult; or the mother-in-law… I don’t know… but tolerant: tolerant… charity, always, but hard-working. And also the joy of praising the Lord: ‘Exultant in joy.’ That is how we must live this journey, this desire to encounter the Lord. To encounter Him in a good way. Not standing still. And we will encounter the Lord.

The Lord seeks us first

Pope Francis said that this “is the great surprise of the encounter with the Lord: He sought us first. He is always first. He makes His journey in order to find us.” That is what happened with the Centurion:

The Lord always goes beyond, goes first. We take one step and He takes ten. Always. The abundance of grace, of His love, of His tenderness that never tires of seeking us. Even, at times, with small things: We think that encountering the Lord would be something magnificent, like that man of Syria, Naaman, who was a leper [did]. And it’s not simple… And he too had a great surprise at God’s way of acting. And our God is the God of surprises, the God that is seeking us, is awaiting us, and asks of us only the little step of good will.

We must have the “desire to encounter Him,” the Pope continued. And then He “helps us.” The Lord, he said, “will accompany us during our life. Although many times, perhaps, we seem to be far from Him, “He waits for us like the father of the prodigal son.”

Faith is not a philosophy

“Often times,” he added, “He sees that we want to draw close, and He comes out to meet us. It is the encounter with the Lord: This is the important thing! The encounter.”

Pope Francis said he was always struck by something Pope Benedict had said, “that the faith is not a theory, a philosophy, an idea; it is an encounter. An encounter with Jesus.” If, on the other hand, “one has not encountered His mercy,” it would be possible even “to recite the Creed from memory” without necessarily having faith:

The doctors of the Law knew everything, all the dogmas of that time, all the morals of that time, everything. They did not have faith, because their hearts were far from God. Drawing away or having the will to go forward to encounter. And this is the grace that we ask for today: ‘O God, our Father, raise up in us the desire to meet your Christ,’ with good works. To meet Jesus. And for this we remember the grace that we have asked in prayer, with vigilance in prayer, industriousness in charity, and exulting in praise. And so we will encounter the Lord and we will have a very beautiful surprise.