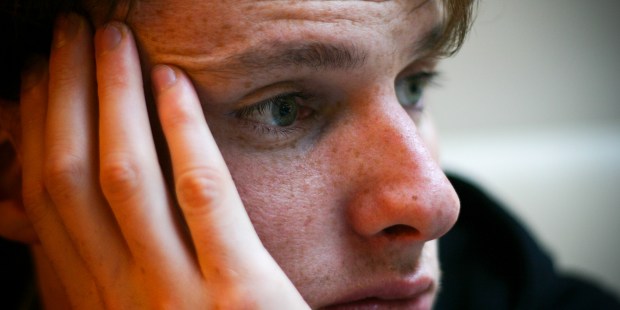 It’s the spiritual equivalent of physical pain: it tells us when something is wrong.

I watched far too much Comedy Central growing up, but I learned two important lessons from it: 1) you don’t have to be especially funny to get on TV, and 2) an awful lot of stand-up comedians are lapsed Catholics. And an awful lot of those Catholics make jokes about their “Catholic guilt.” A favorite target of an older generation is the “no meat on Fridays rule,” inviting quips along the lines of “I don’t pray or keep any of the commandments anymore, but I’m still terrified to have a hot dog at the end of the week.” This sense of guilt is portrayed as a millstone around the neck of otherwise decent folks, a ponderous chain clapped on to the ankles of the faithful by sinister clerics bent on absolute control of people’s lives.

With all due respect to the likes of George Carlin, Dennis Miller, et al: Nonsense! Guilt is not a punishment, but a gift of God. Far from a psychological hindrance imposed by overbearing parents and clerics, guilt is the alarm bell rung by conscience itself that tells us when we’ve violated the natural law and put ourselves out of sync with the divine order of things.

To use a medical analogy, guilt is the spiritual equivalent of physical pain: it tells us when something is wrong. If my toe is broken, I’m alerted to this fact by a throbbing ache or a sharp pain when I clip the edge of the coffee table; if my shoulder is separated, the screaming stabbing sensation is a dead giveaway that something’s amiss. This unpleasant feeling lets us know our attention is required in a certain area of our bodies. Likewise, guilt informs us that our focus and effort is needed in a particular region of our soul—our faith may be lagging, our hope sagging, our charity flagging. We may have spoken a harsh word or committed an imprudent act, and that sinking feeling is the sensation of the wound we’ve inflicted on our souls. And that’s something we should like to know about!

Now, guilt is not an infallible tool. Things can go wrong in our sense of guilt. The scrupulous person is far too sensitive to guilt. And I think this is the caricature people are referring to when they talk about “Catholic guilt” in the way the comedians often do. But scrupulous people are the exception, not the rule. Perhaps we could say they are like spiritual hypochondriacs, constantly concerned about every tiny ache and pain, certain that at the very best it’s the sign of a debilitating and excruciating disease that’s looming. Thus scrupulous people do not give us a good picture of guilt any more than hypochondriacs give us a good picture of medicine.

On the other extreme, there are people whose consciences have become so desensitized and deadened to guilt that they take no notice of the spiritual consequences of their actions. They slip further and further into sinful behavior, from the trifling on down to the serious, without noticing the cuts and bruises they’re accumulating that could lead to a deadly infection. Their atrophied sense of guilt is no longer able to alert them to the harm they do themselves.

These aberrations have sullied guilt’s reputation and given it a bad name. But rather than reject our sense of guilt because of the excesses of some, we need to form our consciences well and embrace our guilt as the gift of spiritual self-awareness that it is. Heeding the warnings of our guilt makes the difference in the health of our soul, and that’s no joke.