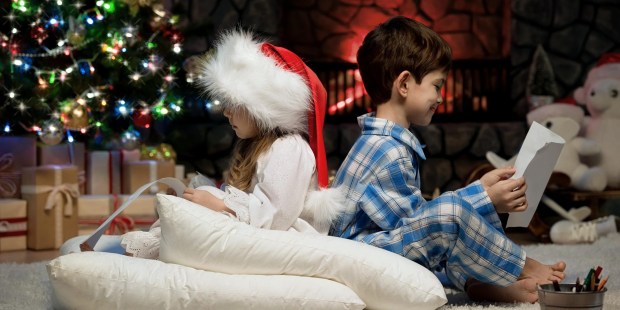 J.R.R. Tolkien, who wrote to his own children as “Father Christmas,” provided the inspiration

A few years ago I came across a book by J.R.R. Tolkien called “Letters from Father Christmas.” It is a collection of letters Tolkien wrote to his children every year at Christmas time. Tolkien took the role of “Father Christmas” (aka, Santa Claus) and wrote to them about an entertaining story from the North Pole.

The letters would arrive anytime near Christmas and would often have fresh snow on them in the morning or sometimes be delivered by the postman. The stories recounted are quite hilarious, featuring a polar bear assistant, snow elves, snow men, and of course, an attack on the North Pole by goblins (don’t worry, the polar bear kills at least a million of them, at least according to his claims).

What really brought these stories to life are the numerous illustrations that Tolkien made for each letter. He obviously spent a great deal of time imagining what this fictional world looks like and paid attention to every detail of the letter, even down to the shaky handwriting of an aged Father Christmas. He wanted to delight his children and hear their laughs when they read the stories.

His example of intentional fatherhood inspired me and so I wanted to imitate him and dig a little deeper to see what I could pass on to my children.

Above all things Tolkien wrote these letters out of love for his children and a desire to keep alive in them the flame of fantasy and a desire for the eternal. As he wrote about the power of fantasy in On Fairy Stories, “The peculiar quality of the ‘joy’ in successful Fantasy can thus be explained as a sudden glimpse of the underlying reality or truth. It is not only a ‘consolation’ for the sorrow of this world, but a satisfaction, and an answer to that question, ‘Is it true?’…in the ‘eucatastrophe’ [of good Fantasy] we see in a brief vision that the answer may be greater—it may be a far-off gleam or echo of evangelium in the real world.”

Basically, fantasy stories have a power to point to something greater, and they are an especially powerful vehicle for eternal truths when presented to children. Children love to hear stories and the figure of Santa Claus remains a fantastical image of Christian living that all children are captivated by.

In particular, the origins of Saint Nick provide a wealth of lessons for children and so I decided I would do what I could to wed the two traditions. I decided to create my own Christmas tradition and write letters to my kids on the feast of Saint Nicholas (December 6). The letters I write each year are geared to their ages (the oldest is now 5), but every December I am able to expand the story and include brief exhortations on Christian living. I do so not in a “preachy” way, but through gentle wisdom and comedic events.

More to read: 5 Fun feast days to celebrate with your kids

What I try to present to my kids is not a “Krampus” type creature who punishes those who are naughty, but a joyful “Father Christmas” who is deeply interested in their lives and loves them dearly.

Besides a personalized letter, Saint Nick may leave a few trinkets in their stockings, which is always noticed by the kids. In the end, my hope is that they will continue to believe in Saint Nick for years to come and begin to realize that behind the polar bears, elves and little gifts is a real Saint Nicholas who watches over them in Heaven and prays for them daily.

An image from Letters From Father Christmas

[Editor’s Note: Take the Poll – Do your children get letters from Santa?]