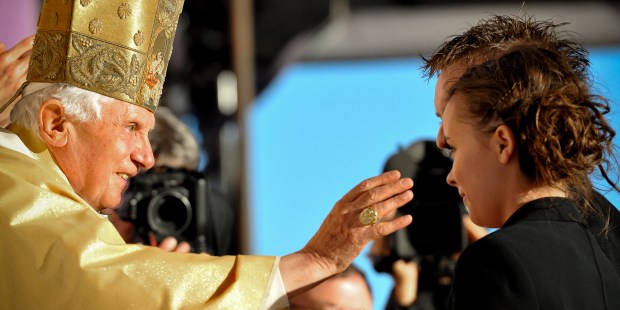 In youth we might point to a line in the Catechism and everything is “settled”; age finds us saying, “Well, yes, and no…”

I had thought, and you probably did too, that along with the pains of age came some advancement in the more important things. Your knee may hurt for mysterious reasons, and you may feel the burden of all your mistakes and all you did not do, but you find prayer easier and feel more instinctive sympathy for people you used to dislike. You gain insight into people, life, yourself.

That’s true, says Pope Emeritus Benedict in his latest and last book, The Last Testament. “In old age, you are more deeply practiced.” We’ve learned to do what we do and we do it better than we did when young. The gains of aging balance the losses. So there’s that.

Not easier, but harder

But he doesn’t leave it there. There’s another movement in the other direction. He quotes the great Catholic theologian Romano Guardini, who said, “In old age, it doesn’t get any easier, but harder.” Benedict gives an example of his own: “One feels the difficulty of life’s questions more deeply.”

What questions does he mean? Two kinds: Big questions, like why God allows so much evil, and the smaller, practical questions of life in a fallen world, like “How can I help him?” and “Why doesn’t he get better?”

That’s the getting harder part. For me, this means that you believe what you did when younger, but feel less comfortable with it because you know more about the world. You find yourself saying “Yes and no,” when as a younger person you would have pointed to a line in the Catechism and walked away thinking you’d settled the matter. To put it a different way, you become more merciful when before you’d been more moralistic. You see yourself in the bad guys in Jesus’s parables.

This is my experience, anyway. And you also feel more deeply the world’s pain. It “complicates the narrative,” as an academic might say. Words that once seemed to settle the matter don’t comfort you anymore.

I won’t claim any great advance in charity, but I do see better now how much pain there is in the world. I see more clearly how many people have suffered deep wounds that help explain why they keep doing things they shouldn’t. My own need for mercy from other people as well as from God has become much clearer to me, along with the knowledge that it’s not as clear as it should be. I know better why Jesus said “Judge not.”

In other words, feeling the difficulty of life’s questions more deeply, you’re not nearly so insufferably smug and confident as you were — as I was, anyway — as a youth. You have some wisdom, when before you had only some knowledge, which you misapplied.

Another side to Guardini’s insight

Bummer, you may be thinking. Not only will your knee hurt but you’ll feel the world’s pain more deeply, and have a keener feeling of your own failings and sins, of the things wrongly done and the things wrongly left undone. But Benedict says something that turns the whole thing around. There’s another side to Guardini’s insight that life gets harder as you get old, not easier.

We may feel the difficulty of life’s questions more deeply, he says, “but then one also finds the greatness of Jesus Christ’s words.” Jesus is “always great and full of mystery. The depths of the Word are never fully plumbed.”

Benedict gives examples from his own life: “I now find many statements from the gospels more challenging in their greatness and gravity than I did before. … Some words of wrath, of rejection, of the threat of judgment, certainly become more mysterious and grave and awesome than before.” Even in old age, he adds, the truth “comes close to you as something completely new.”

In other words, life becomes harder because we see more clearly, but we also see more deeply into the Gospel, which makes life easier. I think the reality of mercy is one of those things. We get to know our Lord better and in ways we could not when young. I suspect this is true of the saints, but it’s certainly true of us un-saints.