“We help people because we’re Catholic, not because they’re Catholic.” 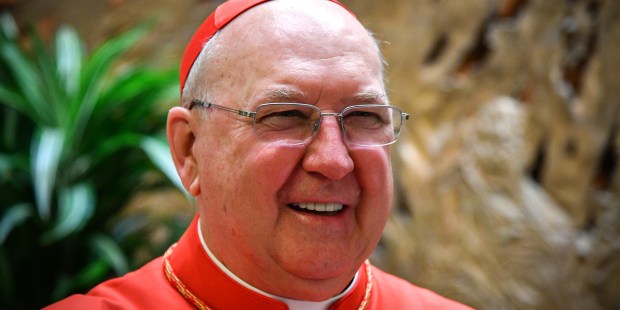 The former bishop of Dallas, Kevin J. Cardinal Farrell, recently received the inaugural “Upstander Award” from the Dallas Holocaust Museum Center for Education and Tolerance in recognition of his outstanding commitment to human rights and dignity. The museum board’s chair-elect, Florence Shapiro, presented the award and spoke about the local diocese’s longtime partnership and its support of the museum’s programs and exhibits. Shapiro thanked the diocese and Cardinal Farrell for their “gift of hope.”

“An ‘upstander’ stands up and speaks up for what is right, even if at times they stand alone,” Shapiro told the audience at the award ceremony. She noted that Farrell, who was the seventh bishop of Dallas, stood up a lot and at the root of it was always his compassion for others. She said, “I’ll never forget in 2014, after being asked by a reporter to explain why he invited the non-Catholic family of a Dallas ebola victim to stay at a church-owned home as they waited in quarantine to see if they had contracted the disease, he said: ‘We help people because we’re Catholic, not because they’re Catholic.’”

On September 1, Pope Francis appointed Bishop Farrell to a new post in the Vatican: Prefect of the Dicastery for Laity, Family and Life, and on November 19, he was elevated to the rank of cardinal. “What we have known in Dallas, the pope now knows,” said Shapiro.

As the museum thought about how to honor Farrell and his contributions, Shapiro said they decided to create an award that exemplifies his values and name it after him. Each year, the Upstander Award will recognize prominent individuals whose actions have advanced the museum’s mission, which is to educate school children and adults about the history of the Holocaust, to advance human rights, and to combat prejudice, hate, and indifference.

Cardinal Farrell, who could not be present in Dallas for the ceremony, send a taped message to all those gathered for the event from Rome. After expressing his thanks and appreciation he said:

… we are all part of one human family and we all need to get together to help each other and… create a better world for everybody. Certainly we can’t change… the whole universe, but we can do a lot in our own city and in our own communities to bring each other closer together, so we all work as different faith communities, different ethnic groups, different races, whatever it may be — but we all need to remember that we are all of the same human family and we all need to help and to care for each other. From the bottom of my heart, I pray that the work I tried to do in Dallas will continue in the future.

Bishop Greg Kelly, apostolic administrator for the Diocese of Dallas, accepted the award on behalf of Cardinal Farrell.