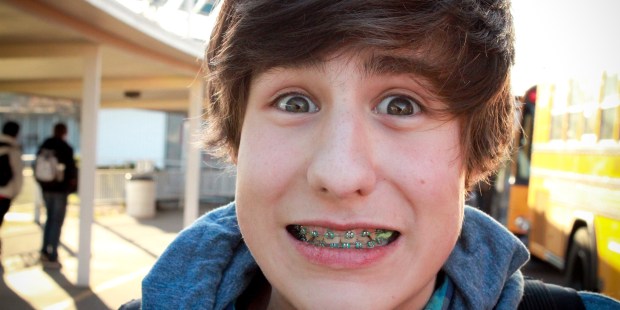 While I was making meatloaf, my 13-year-old was showing himself to be both a casual hero and a theologian

There used to be a form of devotion—perhaps less practiced today but quite widespread not long ago—that included the idea of “offering up” the minor daily hardships that continually strike at us like irritating “jabs,” thereby giving them a meaning. […] What does it mean to offer something up? Those who did so were convinced that they could insert these little annoyances into Christ’s great “com-passion” so that they somehow became part of the treasury of compassion so greatly needed by the human race. In this way, even the small inconveniences of daily life could acquire meaning and contribute to the economy of good and of human love. Maybe we should consider whether it might be judicious to revive this practice ourselves. — Benedict XVI, Spe Salvi No. 40

My oldest son, Patrick, has a genetic disease called Neurofibromatosis. One of the markers, along with typically benign tumors that develop all over his body, is a shortened stature. Patrick is 13 years old but is in the bottom one percentile for growth. Even as a baby, he was always on the verge of falling off the growth charts and I had to constantly intervene with extra weight-gaining shakes. Though he’s a fairly healthy, active boy, he’s much smaller than his peers and some of the natural growth spurts I take for granted in my other children have been something I’ve worried about and wished for with Patrick.

Every pound that child has put onto his body has been hard won.

About a year ago, the doctors who manage his case encouraged us to have Patrick’s growth hormones measured.

My husband and I debated about the procedure for months. If Patrick isn’t producing growth hormones, the treatment protocol includes shots. The thought of pumping my sweet child’s body full of hormones for five years makes me skittish. After prayerful discernment, and talking with Patrick, however, we decided to proceed.

As the testing day approached, Patrick confessed he wasn’t nearly as nervous about the shot of testosterone or the five-hour romp with needles as he was about being without food for half a day. The thought of fasting from midnight the night before until after it was all over stressed him out.

The evening before the test, though, Patrick appeared before me in the kitchen.

“Mom,” Patrick began. “Some of the my friends and I had a deep discussion about religion today at school.”

I absently nodded my head while working. “That’s good,” I said. Patrick attends a two-day a week classical ecumenical school, so I wasn’t surprised by the theological debate at the lunch table.

“Some of my closest friends don’t believe the same things I do,” he started again. “They aren’t Catholic and I tried to explain to them what it is we believe as Catholics.”

“That’s good, son. Were you respectful? I hope you were respectful.”

“I was respectful. It’s just, I want them to know the truth of our faith and they don’t, so I tried to tell them about it.”

I stopped my work and looked at Patrick, giving him my full attention, because he seemed to be gearing up for something big.

“I’m nervous about my test tomorrow,” he admitted. “I don’t want to be uncomfortable. I don’t want to feel hungry and thirsty, but after the conversation today, I decided I’m going to offer up my sufferings for all those outside of the Catholic faith and for all people who have no religious freedom. I’m not going to let my suffering go to waste.”

He turned and walked away.

I stood in my kitchen, my hands full of ground beef, a little stunned. My son, the theologian.

The conversation got me thinking, how quick am I to disregard the small gifts of suffering presented to me? My brave son reminded me in that moment that “Offering It Up” isn’t just some trite Catholic phrase, but real, heroic action — an opportunity to embrace life’s annoyances for the souls most in need.

If Patrick could use his medical test to bring those he loves closer to Christ, I realized, I shouldn’t waste my opportunities either. God knows there’s plenty around here I can give to Him, starting with my own anxieties. I’m grateful for Patrick’s timely reminder.

Read more: The Secret Privilege of “Offering it Up”