Pope Francis: God is waiting for your “yes” 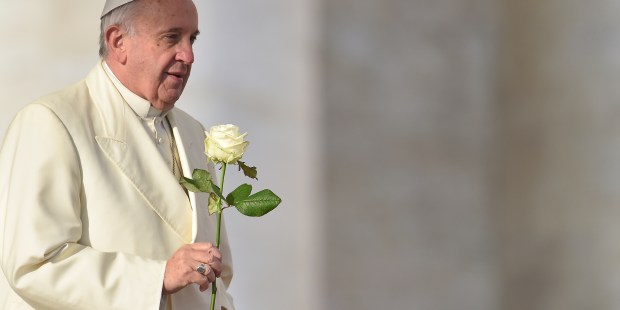 Saying “yes” to God is truly original whereas sin makes us “old inside,” Pope says on the Solemnity of the Immaculate Conception

VATICAN CITY — God is waiting for your “yes,” and giving “half-yeses” to Him can eventually lead to the “no” of sin, making us “old inside,” Pope Francis said Thursday.

In his Angelus address on the Solemnity of the Immaculate Conception, Pope Francis reflected on two readings from today’s liturgy: The Fall of Adam and Eve (Gn 3:9-15, 20), and the Annunciation (Lk 1:26-38).

“The readings of the Solemnity of the Immaculate Conception of the Blessed Virgin Mary are two crucial passages in the history of the relationship between man and God,” he said. “We might say they lead us to the origins of good and evil.”

The Genesis account shows us the origins of sin, the first ‘no’ to God, when “man preferred to look at himself, not his Creator. In doing so, the pope said, man left “his communion with God, he lost himself and he began to experience fear and to hide himself and accuse the one beside him” (cf. Gen. 3:10,12).

“This makes sin,” Pope Francis said. “But the Lord does not leave man at the mercy of his evil. He immediately seeks him out and asks a question full of apprehension: ‘Where are you?’ (v. 9), as if to say: ‘Stop, think: where are you?’”

“It is the question of a father or mother searching for a lost child … and God does this with great patience, in order to bridge the distance which arose at the beginning.”

The Holy Father then turned his attention to the Gospel reading, when “God comes to dwell among us, [and] he becomes man like us.”

“And this was made possible by ‘a great yes’ … that of Mary at the Annunciation,” he said..

“Through this ‘yes’ Jesus began his journey along the roads of humanity; He began this in Mary, spending the first months of his life within his mother’s womb. He did not appear as an adult and strong, but followed the whole path of what it means to be human.”

“He made himself equal to us except in one thing — the ‘no’ — except in sin.”

The pope noted how, in the Gospel, Mary is described as “full of grace” (Lk 1:28), that is, “filled with grace.”  This means, he said, that from the first moment of her conception, there was in her “no room for sin… she is without a shadow of evil.”

Mary’s ‘yes’ is therefore complete and unconditional, without any reservations, Pope Francis explained.

“Mary responds to God’s proposal saying: ‘Behold the handmaid of the Lord’ (v. 38). She doesn’t say: ‘But, this time I will do the will of God, I’ll make myself available, then we’ll see…’. No, hers is a full, total, unconditional ‘yes’ for her entire life. And as the ‘no’ in the beginning had close man’s way to God, so Mary’s ‘yes’ opened the path to God among us. It is the most important ‘yes’ in history, the humble ‘yes’ that reverses the prideful ‘no’ in the beginning; the faithful ‘yes’ that heals disobedience, the ready ‘yes’ that overturns the egoism of sin.”

The Pope went on to say that, also for each of us, there is a story of salvation made of our ‘yes’ and ‘no’ to God. “Sometimes, though, we are experts at the ‘half-yes’,” he said.

But in so doing, we close the door to good, and evil takes advantage of these missing ‘yeses’, the Pope said. “Each of us has a collection of them inside,” he quipped. “Let’s think about it, and we will find many missing ‘yeses’.”

But every full ‘yes’ to God gives rise to a new story, he explained.

Pope Francis concluded, saying that in this Season of Advent, God wants to visit us and is waiting for our ‘yes.’

“Let us consider: today, what ‘yes’ should I give to God? … And we will find God’s voice inside, asking us for something, a step ahead.

“With generosity and trust, like Mary, today let each of us say this personal ‘yes’ to God.”