Pope Francis to Coptic Patriarch: “We are united in the blood of our martyrs” 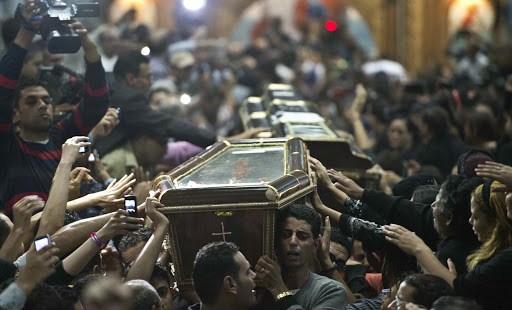 VATICAN CITY — Pope Francis this morning called His Holiness Pope Tawadros II, Patriarch of the Coptic-Orthodox Church of Alexandria, to express his condolences after Sunday’s attack at the Coptic Cathedral of St. Mark in Cairo, Egypt.

At least 25 worshipers were killed and 49 wounded by a bombing during the Liturgy. The attack took place at St. Peter’s Coptic Orthodox Church, adjacent to the Grand Cathedral of St. Mark, the seat of Pope Tawadros II.

According to a statement issued this morning by the Holy See press office, during the call Pope Francis expressed his closeness to the Patriarch and to the Coptic community, especially to the women and children who represent the highest number of victims.

Patriarch Tawardros II recalled an expression Pope Francis used during their meeting in the Vatican three years ago, i.e. the “ecumenism of blood.” For his part, Pope Francis underscored that: “We are united in the blood of our martyrs.”

According to the statement, “the Holy Father also promised his prayer for the Coptic community during the Mass he will celebrate today, on the Feast of the Blessed Virgin Mary of Guadalupe.”

The Patriarch then thanked Pope Francis for his closeness and asked him to pray for them and for peace in Egypt, promising to deliver his condolences to the Coptic community.