Which holiday singing duo is your favorite? 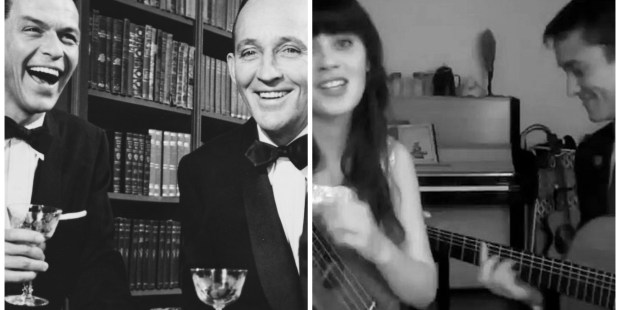 What’s better than nostalgic Christmas music? Christmas duets. We’ve compiled a list of our favorites, a mix of classic songs and newer tunes to set the mood for the coming holidays.

Released in 1941, Bing Crosby’s iconic tune might be the best-selling Christmas single of all time. Frank Sinatra welcomed  Crosby as a guest in a special color episode of his short-lived variety series The Frank Sinatra Show. Following the performance of a series of other Christmas songs, the duo ended their performance with this “White Christmas” duet.

They met working on a movie 17 years ago and have been friends ever since. Though things didn’t work out so well for their characters in 500 Days of Summer, the two are closest of friends in real life and have collaborated in several videos. Here they are singing the Nancy Wilson song “What Are You Doing New Years Eve?”

The newest song on our list, this video comes from couple and acoustic folk-pop duo Jenny & Tyler. The song “Christmastime” is an original from their album Christmas Stories, which hopes to capture a piece of that childhood Christmas magic.

“The Christmas Song,” often known better by its opening line “Chestnuts roasting on an open fire,” was written in 1945 by Bob Wells and Mel Tormé. The song was made famous by Nat King Cole with his 1946 and 1953 recordings of the song, which are considered the definitive recordings of the classic. Here Nat’s daughter Natalie Cole came together in a beautiful duet with famous Italian tenor Andrea Bocelli.