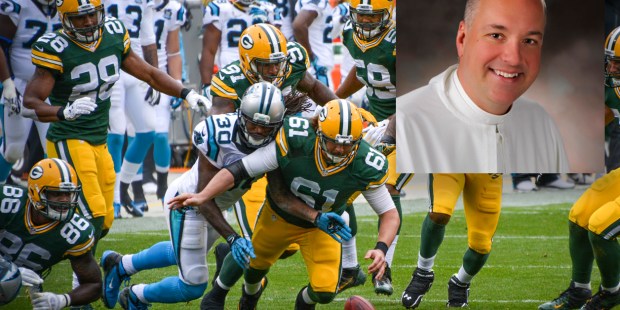 Ever since 1958 the Green Bay Packers have had a close relationship with St. Norbert College in De Pere, Wisconsin, and with the Norbertines who live there. Besides hosting their summer training camp each year on the campus of the Catholic college, the Packers over the years have enlisted the help of the Norbertines to minister to the spiritual needs of their players.

For the past two decades Father James Baraniak has served as team chaplain, and while he enjoys his assignment to celebrate Mass and give spiritual help to the players (and coaches) of the team, he never forgets the needs of his other flock, the inmates at the Green Bay Correctional Institution three miles away from Lambeau Field. In fact, from his home at St. Norbert Abbey Baraniak can see both Lambeau Field and the prison.

Father Baraniak offers Mass at the maximum-security prison every Thursday and is known there as “White Robe,” on account of his white habit. Baraniak explained to MMQB that his habit has significance for the inmates, “They love that because it is [about] identity and brotherhood… They almost see us, the Norbertines, as the original bangers. Gangbangers for good, as they would say.”

Many of the inmates Father Baraniak serves are Green Bay Packer fans, and besides celebrating Mass for both the team and prisoners, Baraniak will also hear confessions and offer spiritual guidance to both flocks. Father Baraniak said in the interview, “Almost every time I am there [at the prison], there is somebody waiting to talk about something weighing heavily on them…[and in the locker room the same thing happens]. Especially one’s rookie moments, wondering, Am I going to be retained, am I going to be picked up or am I going to be cut loose?… They will see the priest for those moments, those real life moments and those ups and downs.”

As an example, Father Baraniak has been there for some of the most difficult times with the Green Bay Packers. During the 2003 season, Brett Favre lost his father unexpectedly and Father Baraniak was there to comfort him as well as answer phone calls for the star quarterback while he grieved his loss.

Read more: Brett Favre’s Catholic faith carries him to the Hall of Fame

In speaking with the The Compass, Baraniak described the general sense of mission in his priesthood, “My definition of pastoring is twofold… It’s comforting the disturbed and it’s disturbing the comfortable. I think the prior needs to do that lovingly, always to build it, never to tear it down. To comfort the disturbed and disturb the comfortable, that’s every Sunday’s Gospel.”

One of the ways Father Baraniak is able to remain in touch with all the players on the team is by carrying out his assigned task of returning the players’ valuables to them after the game. According to the National Catholic Register, “Wallets, cell phones and watches are kept in individual bank bags in the team’s locker room…At the end of the fourth quarter, it’s Father Baraniak’s job to hand out the bags to each of the players before the team boards their buses — and he chats as he does so.”

By doing this small task, Father Baraniak is able to help the players in more ways than one,

“Briefly, I have a chance to discuss the game with each of the players on their way out. I affirm them or challenge them. I’m there to give them a shot in the arm or to console them, perhaps, if they have had a bad game. It’s been tremendous.”

The spiritual connection he shares with both places also allows him to ask for prayers from those whom he serves. Father Baraniak said in the interview with MMQB, “I have the players pray for my inmates, and I have my inmates pray for the Packers.”

In addition to his two flocks, Father Baraniak serves on the Board of Directors of Catholic Athletes for Christ and is the Prior of the Canonry of St. Norbert Abbey. Each year he leads CAC’s annual Mass and dinner for NFL coaches at the NFL Combine in Indianapolis. All of his duties certainly appear to be a tall order for any priest but as Father Baraniak said to The Compass, “I was ordained to serve. I respond gladly.”