The season to be cranky about Christmas, for good reason 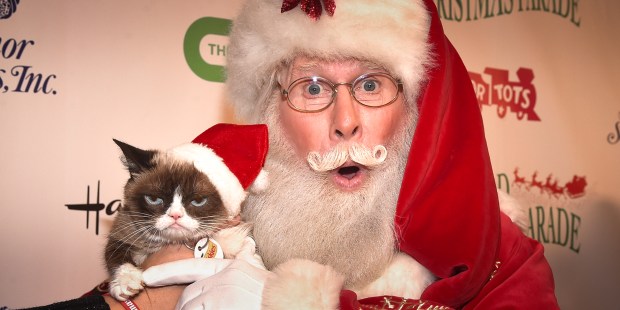 “Hallelujah, Noel be it Heaven or Hell, The Christmas we get we deserve…”

It’s the season to be Cranky About Christmas, a.k.a. Advent. It’s the season people let you be disgruntled and curmudgeonly, if you complain about the way our commercialized culture exploits the Savior’s birth. Even eternally cheerful people appreciate others criticizing the way our culture secularizes and sentimentalizes the turning point in human history, and for such tawdry ends.

But even the curmudgeon has his bright spots. I have a soft spot in my heart, created in my earnest secularish teenage years, for the Christmas song, “I Believe in Father Christmas.” A 1975 hit by the “prog rock” group Emerson, Lake, and Palmer, it was written and sung by Greg Lake, who died last week. It’s serious, which is a big point in its favor, especially when our culture’s religiously-neutral Christmas is so mindless and trivial. But it also vacates the hope it seeks, which is not.

You’ll hear it a lot on the radio, though probably not in stores, unless the company’s muzak programmer — there must be such people, and they are to be pitied — didn’t listen to the lyrics. It’s not a cheery Christmas song, like all the mind-rotting rubbish you hear as you walk the aisles. It doesn’t put you in the buying mood. Lake meant it to do the opposite.

A few weeks ago, he told the English newspaper The Guardian that the song is “about how Christmas had deteriorated and was in danger of becoming yet another victim of crass corporate financial exploitation. As much as I love everyone having a good time, it’s about more than 12 pints of lager and a crate of Baileys. It’s more important to make some spiritual human contact, or visit someone lonely.”

“I Believe in Father Christmas” begins:

I started to give the lyrics a close reading, but that would be breaking the butterfly on the wheel. Even though the prog rockers claimed to be more serious than their peers, still, it’s a rock lyric. But notice the somewhat adolescent blaming of a nameless “they,” who apparently promised something no one promises, and that “virgin’s,” which saves him from claiming to believe in the Virgin Birth but doesn’t make much sense.

They sold me a dream of Christmas,
They sold me a silent night,
And they told me a fairy story,
’till I believed in the Israelite.

Who is, I assume, Jesus. The Christ of Christmas is only a fairy story, yet Lake believes in Christmas, or thinks he does. He is said by Wikipedia to have told a rock magazine that “I find it appalling when people say it’s politically incorrect to talk about Christmas, you’ve got to talk about ‘The Holiday Season.’ Christmas was a time of family warmth and love. There was a feeling of forgiveness, acceptance. And I do believe in Father Christmas.”

Be it heaven or hell

True, yes. That’s what the Christmas of his childhood must have felt like, and what it still feels like, kind of. It’s what it should feel like in serious Christian families, who have reason to forgive and accept, and help in doing so. The culture preaches it, and people do, I think, try to be nicer and kinder. Or intend to, at least, in a way they don’t the rest of the year.

That’s not nothing. But still, it’s not enough. Human good feeling cannot overcome human sinfulness. Lake gets at this at the end:

The best lines in the song, and a striking ending. The curmudgeon looks at the Christmas decorations up before Thanksgiving, and the horrible, horrible “holiday” music, and the commercial appeals to greed and lust and consumption, and the neglect of Godly things, and thinks: Yes, the Christmas we deserve.

But that’s where we both — Greg Lake and we curmudgeons — miss the point. The world in which Jesus was born was just as bad in its own ways, and in many ways much worse. But it didn’t get the Christmas it deserved. We don’t either.

God has intervened. Heaven has landed on earth to keep hell away. Hallelujah, Noel.