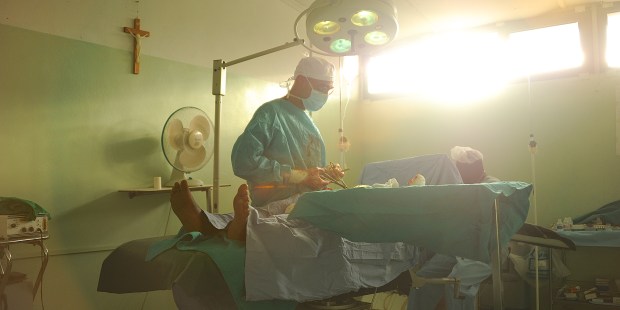 In this “season of giving” comes a film that’s all about giving—radically.

“The Heart of Nuba” is a riveting documentary about an American doctor in Sudan who seems to do nothing but give of himself. Dr. Tom Catena, who hails from upstate New York, is probably as overworked as any ER physician. But he’s up against a few factors he wouldn’t find back home: he’s the only surgeon serving an area with a population of about 1 million people. And the area, Southern Kordofan state, is routinely targeted by government warplanes. Catena’s home and the 435-bed Mother of Mercy Hospital in the heart of the Nuba Mountains are not immune from those air raids.

Filmmaker Kenneth Carlson follows the perpetually scrubs-clad Catena from an early morning chapel visit across the dusty landscape to the hospital, where he is assisted by a small but dedicated staff of local Nuba people and expatriates. When he’s not doing rounds or operating (and there are several surgeries here that are graphically depicted), Catena is on call. But he does manage to get away from the hospital from time to time—to trek up the hill to visit a leper colony. There is nothing Catena won’t do for his adopted Nuba, and his playful and sincere interaction with everyone he meets is heartwarming.

The feeling is mutual: everyone in the area respects Catena as if he were some high priest and yet one of their own family.

That respect can only be enhanced by the fact that Catena could leave anytime he wants, but he’s staying right there with the Nuba as they are terrorized by constant flyovers of regime Antonovs. Air raid drills are common, and the camera often follows gaggles of children scurrying into foxholes, screaming and shaking with fear. Sometimes those planes drop bombs in the area, and the wounded end up on Catena’s operating table.

The 52-year-old doctor’s saintly patience gives way to his outrage at what Khartoum is doing here. There are no rebels in these hills, one or more people interviewed for the film attest, so why is the regime bombing the Nuba?

Bishop Macram Max Gassis, who was a prominent voice for justice during Sudan’s two-decade-plus civil war, proffers an explanation. Sudan’s longtime Arab leader, Omar al-Bashir, considers the black Sudanese to be inferior, for one thing. For another, the Nuba are living their peaceful lives (Christians, Muslims and Animists coexisting harmoniously, he points out) on land that contains oil and other mineral wealth. How convenient it would be if the Nuba would just decide they could live peacefully elsewhere.

The CIA World Factbook sums up the situation:

Since South Sudan’s independence [in 2011], conflict has broken out between the government and the Sudan People’s Liberation Movement-North in Southern Kordofan and Blue Nile states, which has resulted in 1.2 million internally displaced persons or severely affected persons needing humanitarian assistance.

That assistance has a hard time getting through. Apparently, Khartoum is afraid that humanitarian supplies will end up in rebel hands, so the regime insists on being the gatekeeper. Catena, normally calm and meditative, finding a center in Mass, rosary and spiritual reading, flies off the handle at one point, in the midst of a local measles outbreak that takes the lives of several toddlers and adolescents. Vaccines are blocked by Khartoum, and kids die as a result.

“They’re not the ones who have to listen to the screams of the mothers who lose their children,” Catena blasts. “Let them come here.”

As if Catena didn’t have enough to do, he documents the war-wounded civilians even as he operates. He defiantly displays a camera chip containing photos that he hopes to one day present at a war crimes proceeding. A man whose nose was totally blown off. A boy whose arm and leg had to be amputated so close to the stump that he would not be eligible for prostheses, rendering him virtually useless in this agrarian society.

Al-Bashir is already known to those who would preside at such a trial. The International Criminal Court has indicted him for crimes against humanity, war crimes and genocide in Darfur. And yet he continues his campaign.

The film, executive-produced by Maria Shriver, is being screened in Congress, the House of Lords, and other halls of power in the West. Carlson, Catena, Gassis, and many in the Nuba Mountains hope it will make a difference.