The Light of Advent breaks through “show and tell” 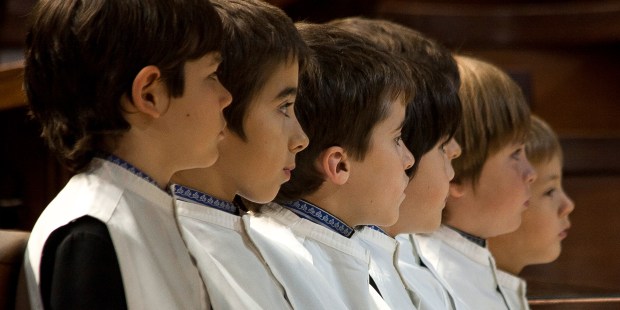 When my five boys stood up, I admit it, I got chills.

It was a rainy day a few weeks before Christmas.  My six boys and I were crowded into a colorful corner at the local library.  A curly-topped blond librarian closed her book and asked the children’s section if anyone had brought anything for “Show and Tell.”  My oldest reached into his pockets to find only lint. My youngest looked at me pleadingly.

“I didn’t know,” I mouthed with exaggerated eyes.

I too felt the twinge of disappointment.

And in a breath, to my astonishment, my five older boys stood in a circle while I hung back, bouncing the baby in my arms.

“Gloria in excelsis Deo,” they sang.  I joined in softly, but mostly I looked around at the faces in the fluorescent-lit, wood-paneled room. Tired eyes shifted away from computer screens to stare in our direction. Shushing librarians softened — I even caught the grumpy one smiling. An older woman in burgundy sweats stopped in her tracks and turned to take my boys in. She dropped her book bag and clasped her hands as if she were in line for Communion — her eyes grew wide and watery.

And my sons sang on, loudly:

That means, “And on earth, peace to men of good will.”

They sang the whole thing. In Latin. Now, I realize I’m sharing a proud moment that happened on an ordinary — actually, an otherwise gloomy — Tuesday afternoon. However, I take no credit for the singing or for the Latin. Let me explain and give credit where credit is due.

Some time ago, a kindly priest named Father Connolly took mine and several other “biggish” families under his wing. Father says the Mass in Latin once a month then invites us back to his rectory for pizza, friends and fun. So when my kids noticed that Father didn’t have a choir, they asked to look up the Gloria on YouTube. Long story short, we learned the sung prayer line by line over the course of a few months.

And so, as toddlers thumped books off shelves on that damp Tuesday afternoon, a Light broke through the fog at the sound of my sons’ singing — the extraordinary interrupted the ordinary as my boys worshiped with the saints and angels in heaven.

I’ll admit it — I got the chills. The moment felt so much more honorable than the moments earlier in the day when I was scraping cemented oatmeal off the floor beneath the high chair. But I believe such heavenly Light is present in our days all the time — even in moments underneath a filthy high chair. We so often fail to recognize it, but when we do — when the Light comes to us just a little brighter, or in the case of our Tuesday at Story Hour, a little louder — the experience is an honor, a beauty and a driving, motivating force.

The Christian thinker C.S. Lewis explained this when he said, “We may ignore, but we can nowhere evade the presence of God. The world is crowded with Him. He walks everywhere incognito.”

And so, as my sons finished up their song, the woman in the burgundy sweats joined in. Her voice warbled. On the “Amen,” she opened her arms to my boys.  And while sighing a laugh, she wiped tears from her eyes.

I realize now that my sons had so much more to offer at the library that day than the lint in their pockets. Young as they are, God used them to carry His Light into the world, and I couldn’t help but sing along.