A new friend and a great recipe: I got a Christmas miracle two-fer! 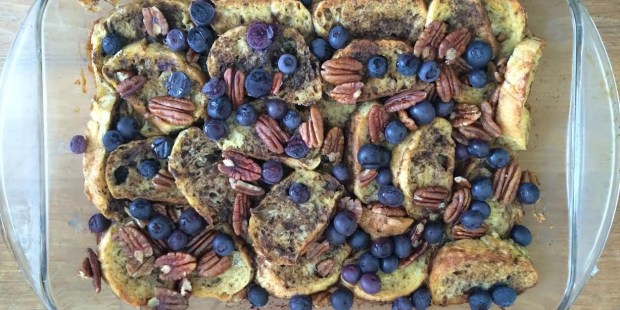 A funny thing happened on the way to the blueberries…

It was two days before Christmas and I simply did not have time. I couldn’t afford a run to the grocery store and deal with the bustling crowds of last minute shoppers in the midst of all that I was doing. But I’d forgotten the butter, so I was forced to brave the cold and the crowds.

Making my way through the produce aisle, I spotted an elderly woman who was pushing her carriage slowly and seemed a bit lost. She sounded as if she were talking to herself. As I approached her, I discovered she was. I asked if she needed help.

Fumbling through her purse, she pulled out a folded piece of paper and said she was looking for fresh blueberries for a recipe she found in a magazine. I went with the woman – whose name, I learned, was Ellen — to find the tucked-away fruit. We found them, but since the fresh blueberries were not in season and were a bit expensive, Ellen decided to opt for frozen.

I began to walk with Ellen to the frozen food department on the other side of the store. We chatted along the way, and my new friend told me all about the recipe and how it is assembled in one pan on Christmas Eve to enjoy on Christmas morning. She sold me on the idea, so I grabbed a bag of frozen blueberries for my own shopping cart. Ellen and I gathered up the remaining items we both would need for the special Christmas breakfast. Before parting company, we exchanged phone numbers with the intention to chat again.

After Christmas, we spoke on the phone and compared notes about our overnight Christmas French toast and we made a date to get together.

That was several years ago. Since then, we’ve gone out for tea, watched a Christian movie at the theater, and chatted about our faith and families time and time again. I even brought Ellen a rosary from one of my visits to Rome. Though she is not Catholic, she said she appreciated it very much and began praying the rosary. Later on, she would tell me that she wasn’t sure if she was saying it just right, but that praying it brought her much comfort.

We are still friends to this day. And to think that our friendship was born in a grocery store on a blustery day when I was tempted to not leave the house! But, oh, how I marvel over God’s mysterious and wondrous ways. He arranges beautiful serendipitous encounters that can turn into meaningful faith-filled meetings and even long-term friendships. We just need to open our eyes and our hearts—and slow down a bit too.

(to be made on Christmas Eve)

On Christmas morning, after placing this pan of assembled ingredients into the preheated oven, simply set the timer and then go and open your presents! It’s so easy!That’s the idea—to keep it simple and enjoy your loved ones.

I hope you enjoy this recipe. I can’t help but think of my friend Ellen and Christmas every time I make it.

Ingredients
nonstick spray
baguette, cut into 20 one-inch slices (I use 1½ to 2 whole grain baguettes)
6 to 8 eggs
3 cups milk
1 cup brown sugar (I use 1 cup honey instead)
vanilla extract to taste (1 or 2 tsp.)
nutmeg to taste (I use cinnamon, as well)
1 cup pecans, toasted
2 cups blueberries, fresh or frozen

Coat a 9 x 13–inch baking pan with nonstick spray, and arrange baguette slices in a single layer in the dish. I usually “cheat” and make more than one layer. In a large bowl, whisk together eggs, milk, three-fourths of the brown sugar (or honey), vanilla, and nutmeg. Pour the mixture evenly over the bread.

Cover and chill the mixture overnight. There will appear to be a lot of moisture when the mixture goes into the refrigerator, but most of it will all soak into the bread throughout the night.

Just before baking, sprinkle the remaining quarter cup of brown sugar (or honey), the pecans, and the blueberries over the top. Bake in a 350ºF oven for about 45–60 minutes or until golden and bubbling. (Check it at 45 minutes and keep an eye on it for the remainder of the time.) It should be a light golden brown on top, and the egg mixture should be completely cooked.

Serve with pure maple syrup. For an added treat, heat the syrup with extra blueberries to make blueberry-flavored syrup. You can serve this dish with fresh fruit on the side and breakfast sausage or bacon, too. Enjoy!