Rogue One: A Star Wars story that stands alone, but fills in some gaps, too 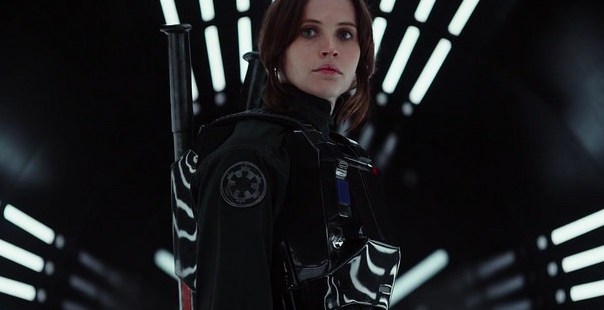 It’s not always easy to tell who is wearing the white hat in Rogue One.

You know the routine by now. The lights go down and the words “A long time ago in a galaxy far, far away…” appear on the screen. The audience holds its breath in anticipation, waiting to burst into applause as John William’s beloved fanfare erupts and the opening crawl begins. Except in Rogue One: A Star Wars Story, that moment never comes. Its absence is legitimately jarring, and an immediate sign that we shouldn’t be so sure of what to expect in this first standalone installment in the Star Wars franchise.

That’s no small accomplishment considering that anyone at all familiar with the Star Wars universe should already know exactly how Rogue One ends. After all, the very first words to appear on the screen in the original Star Wars back in 1977 inform us that the Rebels “have won their first victory against the evil Galactic Empire,” and that “Rebel spies managed to steal secret plans to the Empire’s ultimate weapon, the DEATH STAR.” Of course, what that original crawl didn’t explain was just who those Rebel spies were, how they accomplished so dangerous a mission, and what their ultimate fates were. Rogue One fills in those gaps and a lot more.

Rogue One is primarily the story of Jyn Erso (Felicity Jones), who as a young girl witnessed imperial forces murder her mother and capture her scientist father. Effectively an orphan, Jyn is taken under the wing of radical freedom fighter Saw Gerrera (Forest Whitaker), who raises her as a soldier. Years later, when rumors leak out that Jyn’s father is developing a horrifying weapon of mass destruction for the Empire, the now grown Jyn is conscripted by the Rebel Alliance to track him down.

A ragtag group of Rebels eventually assembles around Jyn’s mission. This includes a weary soldier with more than his fair share of blood on his hands (Diego Luna), a sarcastic and untrusting droid (Alan Tudyk), a guilt-ridden imperial pilot (Riz Ahmed), a blind former guardian of Jedi temples (Donnie Yen), and his heavily armed companion (Baze Malbus). It is this dirty half-dozen which eventually leads the effort to snatch the plans for the Death Star.

And dirty they are. While the main series of Star Wars films have stuck to the tried and true formula of good guys versus bad guys, Rogue One gives us characters who inhabit the greyer areas of the battlefield. When the Empire and the Rebels clash in Rogue One, innocents often suffer or die, and it isn’t always the Stormtroopers who are to blame.

That’s not to say there isn’t virtue on display in Rogue One. There is heroism and self-sacrifice and, most importantly, an acknowledgement of the necessity of hope. It is no small thing that in some of the film’s darker moments, Jyn clutches her Khyber crystal necklace much as one would a crucifix or rosary, expressing her faith in the guiding Force of her fictional universe. But the hope she and the others expound is not merely the simple wish for a happy ending. It is more akin to the theological virtue of Hope in which one places trust in the knowledge that the ultimate good will eventually win out, even if we ourselves don’t live to see it in this lifetime. That’s important, because this is a movie where war has consequences and not all of the heroes make it to the end.

That being said, it’s not all doom and gloom in Rogue One. Humor abounds, mostly through the quips coming from Tudyk’s droll droid. There is action aplenty, especially in the climactic battle, which is as chaotic and exciting as any yet seen in a Star Wars film. And for devotees of the franchise, there is a ton of Easter eggs and character cameos to keep things interesting. In particular, there is a moment following the flash of a red light saber that is one the most unabashed and unashamed bits of fan service ever put to screen. And audiences will love it.

There will be quite a few, however, who won’t enjoy the total package. While the film’s somber exploration into the ambiguities of warfare adds a tone of realism to the proceedings, it’s sure to strike a sour note to those fans who would prefer the moral clarity of the regular Star Wars episodes. It’s not always easy to tell who is wearing the white hat in Rogue One. Accept that premise, however, and Rogue One is a fine addition to the Star Wars canon. Perhaps more importantly, it stands as proof that there are still many stories left to be told in that galaxy far, far away, and some of them might still be able to surprise us.