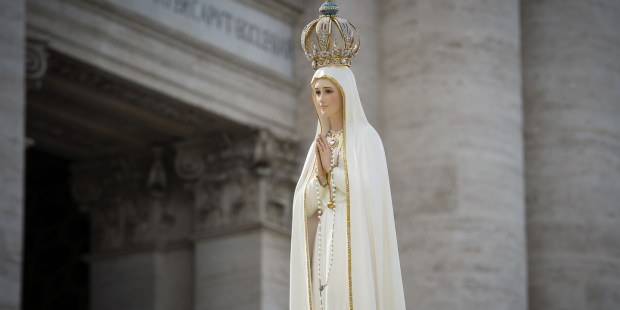 Vatican announces Pope Francis will travel to Fatima on May 12-13, 2017

VATICAN CITY — Pope Francis will visit Fatima on May 12-13, 2017, to mark the 100th anniversary of the apparitions of the Blessed Virgin Mary to three shepherd children in Cova da Iria, the Vatican announced today.

“On the occasion of the centenary of the apparitions of the Blessed Virgin Mary at Cova da Iria, and welcoming the invitation of the Republic and of the Portuguese bishops, His Holiness Pope Francis will travel on pilgrimage to the Shrine of Our Lady of Fatima May 12-13, 2017,” a Vatican statement issued this morning read.

No further details of the visit were made public.

In 1917, the Blessed Virgin Mary appeared six times, from May to October, to the three shepherd children, Lucia Santos and her cousins Francisco and Jacinta Marto, calling for prayer, penance, and reparation. She also entrusted to the children three prophetic messages, or “secrets” to share with Church leaders. The first two foretold the end of World War I and the start of World War II, and the rise of Soviet Communism.

In 2000, the Vatican disclosed long-awaited third secret, describing it as foretelling the May 13, 1981 assassination attempt against Pope John Paul II in St. Peter’s Square. Pope John Paul II credited the Blessed Virgin Mary with saving his life. Indeed, one of the would-be assassin’s bullets was placed in Our Lady’s crown in Fatima, as a sign of her protection.

READ OUR ONLINE EXCLUSIVE: What Pope John Paul II intended to say the day he was shot.

During the apparition which took place on July 13, 1917, the Blessed Virgin also showed the children a vision of Hell, saying to them: “You have seen Hell where the souls of poor sinners go. To save them, God wishes to establish in the world devotion to My Immaculate Heart. If what I say to you is done, many souls will be saved and there will be peace.”

Despite the war and persecution of the Church which Our Lady said would befall mankind, she also reassured the children that: “In the end, my Immaculate Heart will triumph.”

Mary instructed the children to pray the Rosary often, saying: “Through the Rosary, you can stop wars.”

In 1930, the Catholic Church proclaimed the supernatural character of the apparitions and a shrine was erected at Fatima.