This Christmas carol goes back almost two millennia; can you guess what it is? 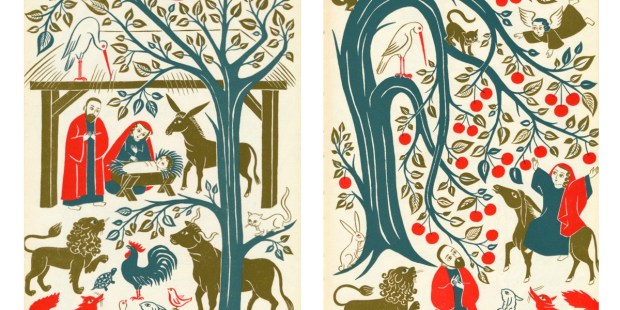 No, it’s not “Silent Night” or “Adeste Fideles” either; it originated in the Middle East

Here’s a Christmas carol you’re not likely to hear on the radio or in the Pandora stream in the stores. Go to YouTube, and you can hear a few different renditions of it—by Joan Baez, Jose Feliciano and even Sting.

It’s called “The Cherry Tree Carol,” and it dates to about 1500 in Merry Olde England. Its lyrics imagine the conversation that might have transpired between a suddenly expecting Mary and her troubled Joseph, and the sign God gave to set the Foster Father’s mind at ease.

While in Matthew we hear “Joseph, being a righteous man and unwilling to expose her to public disgrace, planned to dismiss her quietly,” the carol gives us an angry Joseph who responds to a request from Mary saying, in effect, “You want a cherry? Don’t ask me. Ask the guy who put you in this condition!” But then the cherry tree does something unexpected, and Joseph is convinced of Mary’s explanation.

Scripture scholar Mary Joan Winn Leith, blogging at  Bible History Daily, sees parallels between the parents of Jesus and the original parents of mankind. While Adam and Eve were in the Garden of Eden, Mary and Joseph are in a cherry orchard. In both case, there’s a tussle over fruit.

But in addition to her musing about the song’s meaning in light of salvation history, Leith traces the carol’s roots far beyond medieval England—to “early Christian communities of the Middle East who worshiped in Syriac, a liturgical (religious) form of Aramaic, the language of Jesus.”

Adherents of Syriac Christianity include a range of different denominations, but they have lived in the Middle East for 2,000 years. Today, facing the twin threats of ISIS and the Syrian civil war, the future of these ancient communities is in doubt. The beleaguered Syrian city of Aleppo in particular… is home to many churches, from Syriac-speaking to Evangelical, whose congregations may never recover….

It now appears that the Cherry Tree Carol’s distinctive take on Joseph’s outspokenness at Mary’s pregnancy can be traced back to a unique feature of Syriac liturgy, one still operative in churches (if they survive) today, the dialogue hymn.

Leith, who teaches at Stonehill College in Massachusetts, says that around the 5th century, the annunciation story “expanded into a full-fledged drama in the form of a Syriac Christian dialogue hymn sung in church by twin choirs—one singing the part of Joseph; the other, Mary—as part of the Christmas liturgy.”

The question then is how this part of Syriac liturgy became a medieval English carol. Leith suspects that Crusaders heard it in the Holy Land in the 12th and 13th centuries and brought it back to England with them. They may have even heard it in the Church of the Nativity in Bethlehem. It would have been around the time when the Byzantine Emperor Manuel Comnenos forged an alliance with King Amalric of Jerusalem and sponsored a decorative program in that church. There are inscriptions there in Latin (presumbably for the Crusaders), Greek (the language of the Byzantine Empire), and Syriac.

“I like to imagine ‘Latin’ Crusaders hearing the Syriac Joseph and Mary dialogue performed at Christmas in the Church of the Nativity,” Leith writes. “Captivated by the hymn, they adopted and adapted it to become part of the developing English Mystery play tradition, a tradition we can thank for the Cherry Tree Carol.”

Leith’s short essay is a good reminder of a rich tradition, and the fact that not all carols are about white Christmases or decking the halls.

And, in a time when Christian traditions in the Middle East are in danger of disappearing, it’s a chance to reflect on how much we in the West owe to our spiritual forebears in the Holy Land.

Read more: Christians in the Middle East: An interview with the patriarch of the Syriac-Catholic church