Connor Flanagan: God weaseled his way into my life through the guitar 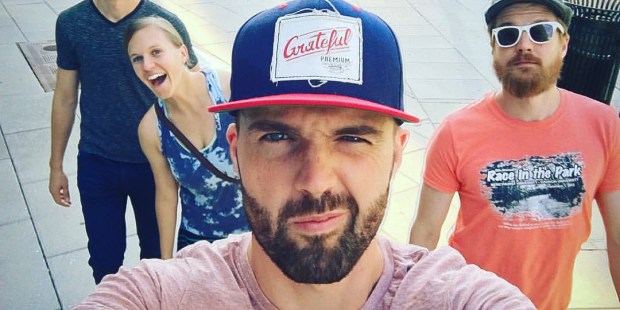 The Catholic musician talks about his faith, his inspirations and his calling

You see, if you get to know Connor, you will quickly be greeted by a spreading, winsome grin that can light up a room. Joy emanates from him. But in short order — when you meet his eyes — you encounter a jarring intensity born of hunger, of deep conviction and of abiding faith. Beneath the smiling shallows stir even deeper waters.

This combination of joy and almost pained intensity — this paradox that is Connor Flanagan — found its beginnings on a 7-acre farm in Richfield, Ohio. The second oldest of five children, Connor recalls his childhood on the farm as idyllic. Memories of getting lost in the woods with his siblings, shooting endless baskets through a hoop on the barn wall and skinning countless knees on the makeshift volleyball court conjure up nostalgia in this still young man. “It was the perfect place to raise kids,” Connor remembered.

Connor’s mother, a special education teacher by training, ran the farm as a rescue operation for abused or abandoned farm animals. What began as an effort at recovery for unfortunate farm animals left behind soon became a sought-after sanctuary for beloved pets and livestock (from other struggling farmers) to graciously live out their remaining days. His father was a Navy man turned commercial United Airlines pilot whose infectious enthusiasm for his work found him warmly greeting boarding passengers (before anyone ever even saw pilots), crafting and passing out airline trading cards to adoring children and even buying meals for passengers inconvenienced by unavoidable delays. His keen commitment to personal care landed him national recognition after a reporter from the Wall Street Journal was awestruck by his onboard experience with the affable pilot. In due time, Connor’s father made appearances on The Today Show and Good Morning America and soon became an organizational spokesman on customer service: speaking on vacation, of course, because his passengers needed him. Connor describes his father as “the most honest, hard-working man I know.”

Connor’s household was deeply loving and devout in its Catholicism. And his mother was at the heart of it. Fresh picked flowers graced the kitchen table on feast days. Small written prayer notes would greet bleary-eyed children on bathroom mirrors in the mornings. Baptismal days were celebrated like birthdays. “I was immersed in small joys of faith,” Connor remembers. “I knew no other option because I never needed one.”

Connor attended Catholic schools (Assumption Academy and St. Ignatius High School) for his formative years of education. And though Catholicism was the air he breathed at home and in school, it was a biography of his high school’s namesake, Ignatius of Loyola, that transformed him. Though Connor was comfortably regarded as a successful student and standout basketball player, it was the founder of the Society of Jesus who opened his eyes to the depth of his own Catholic identity. “St. Ignatius gave me anchor. As a high school boy seeking purpose, [Ignatius’ story] really resonated.” Before long, Connor was serving in campus ministry, attending and participating in weekly Mass and taking on leadership roles during retreats. “The Lord guided me through that time. He had a huge hand. There was never a doubt between the things of this world and the things of the spiritual world.”

Franciscan University of Steubenville, a small Catholic school of several thousand two hours south of Cleveland, would next lay claim to Connor Flanagan. Though he briefly considered a call to the priesthood (particularly the Society of Jesus), he ultimately felt drawn to major in business/marketing and play basketball. However, his faith deepened thanks to taking residence in the campus household dubbed Lion of Judah. By immersing himself in weekly Mass and the Rosary, sacramental living and Ignatian spiritual exercises with a group of like-minded men, Connor would develop lifelong friendships with his housemates and a lasting devotion to Christ. “It changed my life. I’ve never experienced such authentic brotherhood,” Connor recalled.

But while Connor excelled at academics and athletics and found himself deepening in his relationship with God, there was a gift, a calling, a means by which he better wanted to provide witness to the glories of the Faith.

That calling was music.

Connor’s earliest musical recollections found him playing the tin whistle and then the flute through high school. His mother, wanting to engage her children’s musical enthusiasms without surrendering to the overwhelmingly coarse and sexualized music culture, found every way to expose them to Christian musicians. She would bring Connor and his siblings to countless Christian music festivals or let them (rarely) stay up until 2:00 in the morning to catch the televised concert of the trailblazing Christian rap group, D.C. Talk. Before long, Connor began quietly writing songs. As an early teen, Connor finally was given an acoustic guitar and in short order played in a ragtag band named Collision for the iconic eighth grade graduation dance. And though Ozzy Osbourne, Linkin Park and 3 Doors Down had their influence on his musical life, it was still the rapping D.C. Talk that left its greatest imprint on the budding artist.

While these experiences may seem fleeting childhood dabbling soon to be outgrown, music took on new vocational meaning for Connor after two particular experiences during college. The first was the Tuesday night Praise and Worship services on Franciscan University’s college campus. Lost in a sea of fellow Catholics, Connor let himself go to really sing. It was a time devoid of self-consciousness and rich with worship. “It was a place I could sing and not care. I was given a voice. I gave it to God and He gave it back to me.” Connor realized he could really sing. It was liberating and exhilarating. And, what was more, he could worship and evangelize while he did it. The second experience happened when on a study abroad program in Austria. A mentoring friend surprised him with a visit on the condition that Connor would agree to audition for the robust music ministry on the campus in Austria. Connor wavered a bit at his end of the deal, but he did it. And was terrific.

Before long, Connor felt free. Places he visited, experiences he had, moments of joy or tragedy simply spoke to him in crafted chords and lyrics in his head. His first song, Sweet Maria, was a catchy rap song inspired by the Litany of the Blessed Virgin Mary. To his surprise, the reception from those who heard it was electric. “Music and God, for me, were always connected. I became immersed in the music. It was always a dream, but I think God just fed it. I guess He weaseled his way into my life through the guitar.”

And so this was the beginning. Of buying equipment, recording songs in a cramped bathroom, driving hundreds of miles to this gig, flying hundreds of miles to that. He was knocking on doors, cold-calling, handing out free CDs at the end of Christian concerts, asking advice from musicians and priests and benefactors and fans. Conferences, retreats, talent shows, youth ministry events and coffee houses increasingly dotted his exhausting calendar as he played for the young, the old, the holy, the distracted, the cool and the awkward. And out of all of this, came three winsome, grinning and at times, intense albums (Acoustic Flow, Close to You, and his latest Mountains). His repertoire across albums ranges from the lighthearted Hello, Hey! to the poignant Beggarman to his latest album’s hip-hop, Catholic-inspired So Beautiful and wonderfully melodic Fire In My Eyes. Invariably, his work speaks to a younger generation with its energetic cadence and riffing acoustic guitar while simultaneously gingerly holding the Truth of God within each song’s inmost core. As a young man with a devotion to Mary, Connor’s music does as she does: unceasingly points you to the Lord. And all of this from a kid who started with a tin whistle, a mom promoting D.C. Talk, a whole lot of grit and a lot more of God.

When I asked Connor about why his latest album is titled Mountains, that intense look of his returned. “When you look at our history with God, the greatest and most tragic things happened on mountains. And God was extremely present on both: mountains of success and mountains we can’t move. I want to explore the good and the bad… to go to the top and find God there in my victory or defeat. We miss out on so much if we don’t conquer these mountains. We’re not meant to go around them.”

Connor graduated from Franciscan University with a degree in Marketing and an associate’s degree in Theology. He is currently pursuing his master’s degree in Theology. He is married to a delightful young woman who, Connor admits, “can more clearly see the Lord’s hand in all of this than I can.” When he is not writing music and performing relentlessly, he serves as Youth Minister at my parish in Minneapolis. He is dynamic, enthusiastic and child-like in his wonder at the gifts God has given to His children. And the teenagers at our parish can see it, can feel it… and they love it. They see a young man moving mountains and think that, aided by faith and hard work, perhaps they too can move mountains of their own. “I’ve found a love for Church ministry,” Connor says, “I love the retreat work and hope I can do more with the gifts I have. Even more than music, my heart is to come back from a gig and talk to 8th-grade kids about Jesus.”

Then he looked at me with that deep intensity, that deep conviction.