5 Things you (probably) did not know about Santa 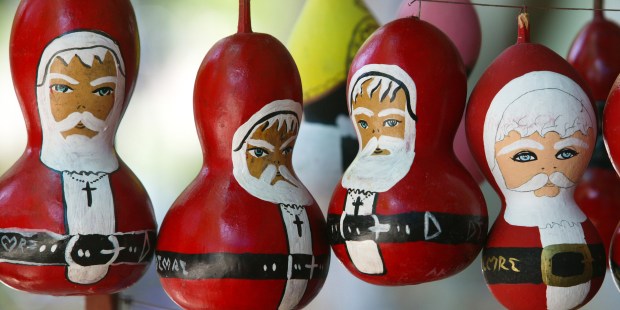 On December 6, according to the Gregorian calendar, we celebrate the Feast of St. Nicholas. The Julian calendar, on the other hand, celebrates it on the 19th. But neither one of these feasts calls for writing a letter asking for presents for Christmas Eve; most likely no one attending them would call the saint by his nickname “Santa”; and no, you won’t find the preacher saying St. Nicholas lives at the North Pole accompanied by magic deer and hard-working elves. That being the case, we wanted to share five things we found interesting to know about the one and only St. Nicholas.

St. Nicholas was born in Patara near the year 270, in present-day Turkey, to a wealthy family. It is said that his parents were fervent Christians, who educated him in the faith. When they died, they left him a considerable fortune, which Nicholas immediately gave away in the service of the needy.

2. He was consecrated bishop by mere chance.

When his parents died, Nicolas moved to Myra (present-day Demre) (hence his name, “St. Nicholas of Myra”). The local bishop had recently died, and several priests were discussing who should occupy his seat. Apparently, the election came to a tie, so the priests decided to appoint the next priest who entered the church as the new bishop. It was Nicholas.

It is said that, while still a young man living in Patara, Nicholas learned that one of his neighbors had fallen into disgrace and was forced to prostitute his three daughters. According to some accounts, Nicholas threw three shoes full of gold through the window of the father’s room, in order to help them remedy their situation. Other versions say the saint threw the gold pieces through the chimney instead, and that the coins miraculously fell into the stockings the young women had left by the fire.

Whether it is Bari or Myra, it is the very same Saint Nicholas. In the East, they call him “of Myra” because that was his diocese as bishop. In the West, he is better known as “St. Nicholas of Bari” since, once Anatolia was conquered, a group of Catholics transported the relics of the saint, secretly, to Bari, on the Italian shore. Soon the fame of the saint spread throughout Europe, until he became patron of Russia, Greece and, of course, his native Turkey.

There’s a story about Bishop Nicholas and his defense of doctrine that goes the rounds this time of year. According to Byzantine tradition, St. Nicholas attended the Council of Nicaea, convoked in the year 325 by the Emperor Constantine. There, our saint would meet not only more than three hundred bishops who went to the Council in order to debate the nature of the Holy Trinity, but also with Arius, who asserted the nature of the Son was not the same as that of the Father. Arius defended his argument vigorously, while the bishops listened. All bishops but Nicholas, that is, who lost his cool and slapped Arius in the middle of the session. Nicholas was brought before Constantine, who determined that it was the bishops who had to decide what punishment would then be applied to the saint.

Right afterwards, they took his bishop’s garments away and locked him in prison. That same night, the story goes, Nicholas had a vision in which Jesus gave him a copy of the Gospels, and Mary returned him his clothes. The next day, when the jailer came to Nicholas to bring him some food and water, they found Nicholas reading the Scriptures, dressed as a bishop. As soon as he heard of it Constantine ordered Nicholas’ release. Eventually, the council ended up agreeing with Nicholas, thus deciding the question against Arius and stating what we now know as the Nicene-Constantinopolitan Creed.

You’ll see that incident featured in Greek and Russian icons and in Facebook memes. But recent scholarship indicates it may well be legendary. There’s no proof Bishop Nicholas attended the council, and his name wasn’t mentioned in connection with it until centuries later. Even the Byzantine tradition concedes that if a blow was administered, it was closer to the “snap out of it” sort of slap than to a sock in the jaw. Legendary or not, St. Nicholas proved himself a champion of faith and charity throughout his life — and beyond.