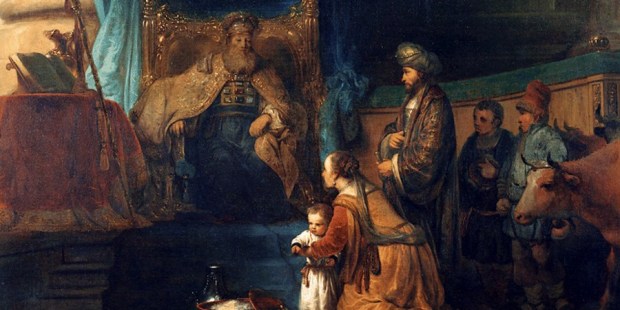 and as we see in scripture, he always has…

Hannah held 2-year-old Samuel in her arms as they waited in the temple courtyard. Her husband, Elkanah, had gone to arrange a meeting with Eli, the high priest. Even before Samuel was born, Hannah had dedicated him to God. She promised that she would entrust her son to the care of the high priest’s household, so that he could learn to serve God from his earliest days. The time had arrived to make good on her promise, but Hannah was not quite ready.

“Isn’t the temple beautiful?” she asked her son as she turned in a slow circle. “This was the very spot where I prayed to God for a son. I wanted a child so badly, and God, in his goodness, gave me you!”

Samuel started to squirm, so Hannah lowered him to the ground and knelt beside him. “You are going to learn so much from Eli and the other priests,” Hannah said, “much more than your Papa and I could ever teach you, that’s for sure.”

Samuel noticed the tears forming in his mother’s eyes and started to cry as he put his arms around her neck. “Oh, now, no crying,” Hannah reassured her son as she blinked her own tears away, “You’re going to be just fine. You’ll make new friends with the other children. Yes, you will. And the women here will take such good care of you, you’ll be spoiled rotten. Papa and I will visit twice a year. You can be sure of that.”

Hannah gently pulled away from Samuel’s grasp and looked into his eyes. “You are going to be a fine prophet someday. As smart as any prophet Israel has ever known. God has special plans for you.”

Taking Samuel in her arms, Hannah stood and looked around to get her bearings. “Now let’s go find your father.”

God asks a great deal of parents. He asks them to love their children, watch over them and protect them and show them the wonders of the world. Then God asks parents to let their children go. Entrusting little Samuel to Eli’s household must have been very difficult for Hannah, but she did so with great trust and hope in God. She knew that God had great plans for her son, and she did not want to stand in the way of that.

During this season of Advent, we remember key figures in God’s great plan of salvation, figures like Samuel, King David, John the Baptist and, of course, Jesus. We also remember their parents, who had important parts to play in God’s plans, too. True to her word, Hannah provided God with a happy, healthy, bright little boy who would become a wise and powerful prophet for the new kingdom of Israel. David’s father, Jesse, taught his sons to be courageous, generous and faithful to God. Three of his sons bravely served in the army of King Saul in the fight against the Philistines and one son eventually became king himself. Elizabeth and Zechariah happily agreed to be parents of John, even though they were a little old for the job, and they did remarkably well. Mary and Joseph put their trust in God and agreed to accept the daunting task of raising the savior of the world.

May God continue to bestow his blessing on parents throughout the world who follow in the footsteps of these holy exemplars.

For the Mass readings for December 22, click here. To learn more about the painting of Hannah and Samuel, click here.

[Editor’s note:  The end of December will conclude Fr. Daly’s reflection series for Aleteia on characters from Scripture. Readers may continue to find his reflections for the new year on his Facebook page: https://www.facebook.com/DanDalySJ/.]