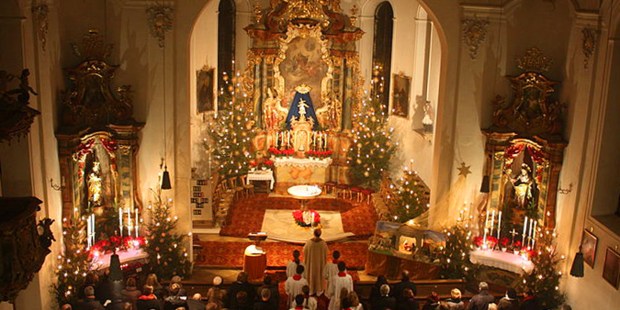 More and more parishes are offering “Midnight Mass” at 9 or 10 p.m. Yes, it’s practical, but something ancient and mysterious and almost primal is being lost.

All these years later, the memory is still vivid.

My mother would nudge me awake around 10 p.m. in the middle of a deep winter’s slumber. “Gregory, get up. Time to go to Mass.” Blinking, I’d crawl out of bed and somehow find my way into my clothes and be pushed, carried or dragged out to the station wagon, which was freezing, and then we’d end up somehow in the middle of all that darkness and all that cold at St. Patrick’s Church. We’d get there early, because the choir would sing carols. The music was magical, and the place was aglow—lights everywhere, candles everywhere, wreaths and ribbons and trees all over. The church reeked of evergreens.

And for the next hour or so, in between drifting in and out of sleep, I’d hear the music and see the lights and feel the crush of people around me in their wool coats. I’d feel bedazzled by the Christmas colors, and I would know, in my bones, that Christmas had come.

Before we left, my parents would take me up to the Nativity scene, to say hello to the Baby Jesus.

And that was Midnight Mass. It was mystical and magical—it still is—and it’s just about my favorite liturgy. To this day, on Christmas Eve at 11:55 p.m., when we prepare to process in for Mass in the middle of a dark and cold night, with young torchbearers and candlebearers solemnly leading the way and the choir gently singing, telling us again the story we know so well—“Once, in royal David’s city, in a lowly cattle shed…”—my heart swells and my eyes fill.

But it’s an experience fewer and fewer people are sharing—and it’s one a lot of kids are missing completely.

The other day, I read about how more churches are offering added services on Christmas Eve, to accommodate young families who can’t stay up for the late Mass—and how a lot of people don’t want to be bothered with having to deal with church in the morning, when there are presents to exchange and hams to cook and relatives to visit.

Increasingly, at many parishes Midnight Mass is happening earlier and earlier—at 9 or 10—and if you look in the Roman Missal, even Rome seems to have decided it’s a lost cause. What used to be called “Mass at Midnight” is now “Mass at Night.” (St. Peter’s has its big liturgy at 10 p.m., local time.)

While there are good, practical reasons for moving the “Mass at Night” to an earlier time, and a lot of sensible reasons for taking kids to the Vigil (which in many places is a pageant), I think something is being lost. Something ancient and mysterious and almost primal.

Why should we bother with Mass at midnight? Let me count the ways.

1… It’s wonderfully inconvenient and illogical. But Christmas itself is inconvenient and illogical—the Incarnation, God becoming man, is stupefying. It defies reason. It is miraculous. It is wondrous. It puts the overwhelming mystery of God’s unflinching love for humanity in an unlikely and improbable place: in a baby, in straw, in a stable, in the middle of dead and dark time of year. We’d rather be hibernating. But that’s exactly why we shouldn’t be. The least we can do is give this stellar event—literally, lit by a star—the attention it deserves, whether it’s convenient for us or not.

2… We need to wake up. Again and again, the message of Advent has been “Be prepared” and “Awake from your slumber.” Christ’s arrival demands that we literally wake up and welcome him. It calls us to journey to him, like the shepherds who watched over their flocks by night, and sought him out. It asks us to leave what is comfortable and familiar and to stand there, blinking, to behold glad tidings of great joy.

3… Nothing proclaims “Emmanuel,” God with us, like blazing church lights in the middle of the deepest, darkest night. When we gather in church to announce our joy to the world and to listen to the singing of herald angels, we announce, as well, our faith in something transcendent. We affirm hope. We exult in salvation. We embrace the beautiful contradiction of it all—and share that with one another. Our ancestors huddled together around a fire and felt nurtured, protected, loved. We gather around the table of the Lord and bask in his never-ending gift, the Eucharist. We need this.

Yeah, I know: it’s not that simple. Life is complicated, schedules are crazy and just getting to Mass is a minor miracle itself.

But there’s something inspiring, consoling and just plain beautiful about worshiping God in the middle of the night—literally mid-night. We are pilgrims on a journey, after all, and so much of that journey is spent in the dark—frightened, alone, uncertain. But on this night, shake all that off. We stand and kneel and pray together in defiance of the dark, amid the greatest light imaginable, Emmanuel, singing glory to the newborn king.

I think that’s worth waking up for.

[Editor’s Note: Take the Poll – Do you prefer midnight mass at to be at midnight?]