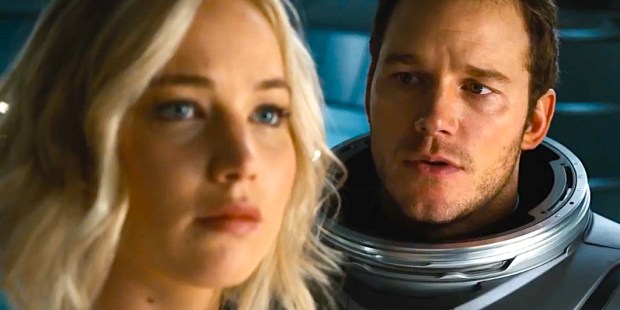 On paper, Passengers reads like a perfect recipe. Hire a well-respected director fresh off an Academy Award nomination for his previous film, give him a script written by the guy who just penned Marvel’s latest critically acclaimed blockbuster, and put two of the world’s most bankable stars in front of the camera. Who could ask for better ingredients than that?

This latest film from director Morten Tyldum (Headhunters, The Imitation Game) starts out promising enough. An enormous spacecraft speeds silently through space, it’s cargo consisting of 5,000 hibernating humans and everything they will need to build a life on a new planet. Thirty years into its 120 year journey, the ship collides with a massive asteroid, causing one of the cryogenic pods to malfunction and open early. From it, engineer Jim Preston (Chris Pratt) emerges to find himself the only person awake onboard, the closest thing to a human companion being the ship’s robotic bartender (Michael Sheen).

Unable to reach the sleeping crew in their sealed chambers, Jim wanders the ship for over a year trying in vain to discover a way to return to hibernation. Finally, resigned to the fact that he must live out the rest of his days in crushing solitude and die alone before anyone else awakens, Jim considers suicide.

On the verge of giving in to despair, Jim happens upon the hibernation pod of young writer, Aurora Lane (Jennifer Lawrence). Entranced by the sleeping beauty’s face, Jim begins to study the passenger records to learn more about the woman. Increasingly convinced that Aurora might be the perfect person to provide the companionship he so desperately desires, Jim begins a months’ long argument with himself over whether he has the right to irrevocably alter Aurora’s life by waking her up.

Given that you don’t hire Jennifer Lawrence to play the role of Wilson the soccer ball from Castaway, Jim eventually goes ahead with his plan to revive Aurora. And sadly, that’s where the movie slowly begins to founder.

If you stop to ponder what a real person would do in such a situation, it quickly becomes apparent there is a lot of ethical considerations in Jim’s dilemma. Is Jim a monster because he doesn’t obey the certain judgment of his conscience, thereby committing an act which consigns another to the same fate as him? Or is his guilt lessened by the fact that he sees his decision as one of self-preservation rather than just personal desire? And what of Aurora? Is what has been done to her unforgivable, or is there room for mercy in the situation?

To its credit, Passengers does spend some time dealing with the inevitable fallout raised by Jim’s decision once Aurora learns the truth of how she came to be awake. As the hapless pair caught in an impossible situation, both Pratt and Lawrence turn in strong performances (though it must be said that Sheen’s android steals the show). Everything that is needed to create a smart and involving science fiction story, from the setting to the characters, is right there.

Unfortunately, someone somewhere in the loop decided that audience’s either weren’t intelligent enough or patient enough to sit through a cerebral sci-fi film without lots of explosions. If only Arrival had come out before the filming of this movie. Alas, it didn’t. So, instead of sticking to what makes the whole setup so interesting, the obligatory crisis is introduced and much of the final act is spent trying to keep stuff from blowing up. The film quickly becomes more of the same old thing; entertaining in parts, but never enthralling in the way it could be.

Passengers isn’t so much a bad movie as it is frustrating. There’s so much squandered potential. That’s the problem with perfect recipes, though. Even the finest of ingredients must be mixed and cooked properly. With Passengers, the final dish is palatable, but only in the way fast food is. Those hoping for a fine meal would be best served dining elsewhere.