Christmas poetry to memorize and recite or just to enjoy 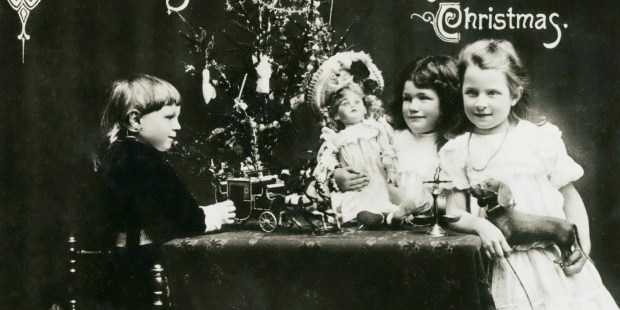 Almost fifteen years ago, I received a Christmas card that I’ve treasured in more than the normal way. In my house, in case you were wondering, the normal way is to pile them all up in a decorative basket during a given holiday season and then put the basket and its cards away in some closet and forget about them forever. But this card I’ve kept on display, all the year ’round, in my glass-fronted bookcase. Every now and again I take it out and look at it with a sense of joy and the wonder — that I should possess such a thing — hardly diminished by the passing years.

What’s on this remarkable card? Actually, there’s not much on the front at all:  the sender’s name, printed beautifully by means of some artisanal letterpress, her signature and a silver star sticker. What’s remarkable about this card is on the inside. Inside the card is a poem. It’s a sonnet of sorts, though up to the final quatrain the rhyme scheme takes a relaxed view of itself. Its subject, broadly speaking, is winter weather in Wales. The sender of the card had told me that she’d taken, as a Christmas tradition, to writing these poems to send out as cards, but that she wanted them not to be sentimental or obviously religious — that is, religious in an or easy or expected way. The poem in the card she sent me is certainly none of those things; it speaks of the frightening disembodied personhood of the wind, the “bronze horizon,” the “asperity of night” altered a little by the act of setting words to paper, and by spare conversation by the fire. “Every phrase we unfold stands upright,” the poem says, as if daring the wind and dark to come and flatten it.

They can’t. Words, in their very fragility and transience, have a way of withstanding and of bringing light. (Here, in fact, is that poem in full.)  I have always thought that what this poem suggests about words also suggests something about the Word — who let himself become something fragile — to kindle a light in the frozen darkness.

Now, I realize that while this poem speaks Christmas to me, it might not say, exactly, Wake, O Wake, or Lo, He Comes with Clouds Descending, or People Look East to other people. Actually, now that I think of it, those hymns are such good poetry that you hardly need any other words to run through your head while you stand in the checkout line at Aldi thinking about the Lebkuchen you didn’t buy because your daughter said she’d make some if she had time, and that it is nagging at you, because Love the Guest Is On the Way, bringing other more corporeal guests with him, and — anyway, maybe now is the time for some other soundtrack to play in your head. Perhaps it could even sound like silence, but silence with words you could say to yourself.

In short, maybe what you need to take up space in your mind this season is poetry. As a poet myself, I tend to think American culture at large needs more poetry and less everything else, at any time of the day or night. Perhaps particularly in this Advent, with every kind of darkness closing around us, I think American culture at large could stand to read and even  memorize some poetry, before collective dementia renders us incapable even of dreaming such a thing. The ancient Greeks forgot how to read and write, I tell my children, and so could we, if we don’t watch out. But not this Advent. Not if I have anything to do with it.

In that spirit, then, let me offer you a brief Advent and Christmas poetry playlist, to keep away the rain, the dark, the gloom, the fear and the amnesia. Some of these poems are good for memorizing; my youngest children at six and seven memorized #2 to recite for their grandmother one Christmas. Some of them, on the other hand, are just good for steeping in and thinking about. (Incidentally, if the thought of trying to read poetry scares you a little, because your English teacher told you that reading poetry is impossible without some kind of magic key, I have made up this little guide for my own high school students. It’s not perfect, but if it helps anyone find a way into a poem, then I will want very little else out of life.)

For that matter, it’s a good place for an essay to end too. That which is true is true. I hope that’s the song these poems play in your mind all season long.

Sally Thomas the author of three collections of poetry:  Brief Light:  Sonnets and Other Small Poems, Fallen Water and Richeldis of Walsingham, forthcoming in 2016 from Finishing Line Press.