How you and your kids can “become like children” 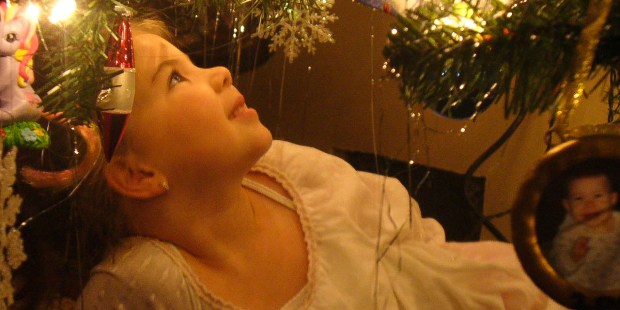 We start out embracing wonder, and too often (too early) we’re taught to let go of it…

“Christmas is for children,” says one song. “From 1 to 92,” adds another. On one level, that’s stupid sentimentality. On another, it’s profound.

At Christmas, the Church is definitely on the side of the child. Children don’t want Christmas to be just one day. Neither does the Church: It’s eight; an octave. And it doesn’t stop then: It’s a whole season.

The Church is on the side of the child because it was founded by Jesus, who came as a child and said, “Unless you turn and become like children, you will not enter the kingdom of heaven.”

Let the Church help you be a child this Christmas, starting with the childlike saints she proposes.

St. Stephen (feast: December 26) had the “face of an angel” and John the Evangelist (feast: December 27) is always depicted as young. But more than that, the two were childlike in the ways we all should be: Open-minded, joyful, loyal, and with no agenda besides love.

St. Stephen wouldn’t back down from believing in love incarnate, and was stoned to death. St. John wrote “The Word became flesh,” and was tortured and exiled for his loyalty. Their stories show what adult strength does with a childlike attitude: It makes us willing to die for Christmas.

Next, to demonstrate holy innocence, the Church gives us the Holy Innocents.

Three days after Christmas, the Church honors the infants King Herod killed in his attempt to get Jesus. “Spotless, they follow the lamb and sing,” says the entrance antiphon at the Mass of the Holy Innocents on December 28. The communion antiphon echoes the nursery-rhyme language, saying they “follow the Lamb wherever he goes.”

This describes how every Christian should be: uncomplicated lovers of God who simply live in his presence, now and forever. As an early Christian book put it: “Remain simple and innocent, and you will be like little children who do not know the evil that destroys man’s life.”

Third, the Church gives us the Our Father incarnate in the Holy Family.

The Lord’s Prayer is the child’s prayer that we never outgrow. Whenever we say “Our Father, who art in heaven …” we are 8 again, repeating the words we said at our bedside, asking to be encircled by the arms of a loving protector.

The Feast of the Holy Family (celebrated December 30 this year) demonstrates what the Our Father prays. In them, his will was done on earth as it is in heaven, bravely, because they knew that he would lead them not into temptation and always deliver them from evil.

Ask them for the grace of “a humble and trusting heart” that follows the Our Father like a child follows her parents.

Fourth: Like Mary, be true to your childhood dreams

On the January 1 Solemnity of Mary, Mother of God, think of Mary, the child of God.

Tradition tells us she pledged herself to God from a young age and was presented in the temple. She didn’t have an ambition for fame or fortune. Her ambition was like the prayer St. Thérèse of Lisieux learned as a small child: “My God, I give you my heart. Please accept it so that no creature may possess it, but you alone.”

Mary’s fidelity ended in the glory of her great feast on the Octave of Christmas, but it was a long time coming through a tough, sorrowful life.

It’s the same with us. Somewhere deep in each of us, the real us is the child us — that person of integrity who looked at life and dreamed of a beautiful future. Like Mary’s, the particulars of our life probably look very different from our dream, but the core remains.

A motto was found in Herman Melville’s writing desk after he died. It said, “Be true to the dreams of your youth.” Ralph McInerny speculates that during the long dark obscurity of his career, Melville would “return again and again to the original aspiration that came to him when young” and keep on writing, even when all seemed lost.

Fifth: Don’t teach your children to stop being children.

Speaking of being true to the child us: We also have an obligation to the childhood of the children we raise — or meet.

The Church offers the one-two punch of St. John Neumann and St. Elizabeth Ann Seton, American educator saints, January 4 and 5, to remind us to take care with children (and that includes the screens, etc. we put in front of them).

But the best way to be more like a child is to imitate the wise men we celebrate on Epiphany as they follow the “star of wonder,” confident that it will “Guide us to thy perfect light.”

Children have not yet lost their capacity to wonder. A 4-year-old excitedly says “Look! A bird!” and reminds you how amazing it is that birds can fly, and how beautiful and intricate creation is.

The Magi’s wonder led them to the Christ child, and there they learned, as Benedict XVI put it, “it is not the star that determines the child’s destiny; it is the child that directs the star.”

If we embrace the wonder and simplicity of children, it will lead us to exactly the same place.