The Christian message within Rogue One: A Star Wars Story 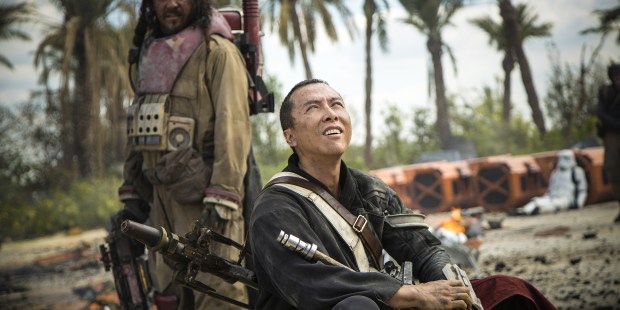 The movie reminds us of the perils of spiritual blindness and the need for a child-like faith that defies our own skepticism.

“Have you come to believe because you have seen me? Blessed are those who have not seen and have believed” (John 20:29).

Rogue One: A Star Wars Story continues to explore the murkiness and tragedy of war and rebellion but does so while presenting a darker perspective than previous Star Wars films. Yet, in the midst of such darkness the movie presents us with a character who sees through the shadows of this world with the sight of faith, and his apparent disability highlights a central theme found in the Gospels.

The character, known as Chirrut Îmwe, is a warrior-monk who lives on the desert moon of Jedha, a place historically tied to the Jedi Order. Even though Chirrut is not a full-fledged Jedi, he is a firm believer in the Force in an age when most people have lost hope in a religion that appears to have been wiped out of the galaxy by the Empire.

Read More: George Lucas was inspired by Catholic warrior-monks when he developed the light-saber wielding Jedi

What is unique about this character is his natural blindness, something that certainly does not hinder his ability to fight. This attribute is something actor Donnie Yen asked for in developing his character with director Gareth Edwards. The choice to make Chirrut blind further impacted Yen’s performance, as he was forced to wear contacts that made it virtually impossible to see. While making certain scenes more difficult, it allowed Yen to enter into his character in a more authentic way.

The symbolism of Chirrut’s physical blindness, whether intended or not, highlights a common theme in the Gospels. It recalls the many blind men whom Jesus healed, men who could not see with their eyes, but knew with eyes of faith that Jesus was the Messiah.

In the Gospel of Matthew Jesus passes through a town where two blind men cry out to him saying, “Son of David, have pity on us!” Jesus enters into their home and asks, “‘Do you believe that I can do this?’ ‘Yes, Lord,’ they said to him. Then he touched their eyes and said, ‘Let it be done for you according to your faith.’ And their eyes were opened” (Matthew 9:27-30).

These blind men never once witnessed Jesus’ many miracles and accepted what they heard with a child-like faith. Their blindness did not hinder their belief in the Son of God, but may have actually helped them believe that Jesus could heal their disability. What they lacked physically in their bodies was compensated for spiritually.

The unwavering faith of blind individuals is often contrasted in the Gospels with the many skeptics who saw with their own eyes what Jesus did and still refused to believe. In fact, Jesus would often condemn the Pharisees and scribes, calling them “blind” because of their lack of faith. It is ironic that in the Gospels the blind can see the beauty of Jesus’ good works, but those with sight can not see the spiritual power behind it all.

This theme of spiritual blindness is brought up several times in Rogue One. While many look down upon the “superstitious” behavior of Chirrut, his truthful words often cut right through the façade other characters try to put on. For example, in the movie Chirrut sees right through the actions of Rebel soldier Cassian Andor and recognizes when the captain is trying to hide his motives from the rest of the crew. Chirrut even challenges Cassian to escape from the “prison” that he has made within himself, observing the interior struggles that Cassian was going through.

Read More: Rogue One: A Star Wars story that stands alone, but fills in some gaps

Later on in the movie at one of the most critical moments in the Rebels’ effort to steal the Death Star plans, it is the faith and actions of Chirrut that save the day. He is able to do what others with sight cannot do and his strong convictions end up being an inspiration to others.

In the end Rogue One reminds us that we are often blind to the things that really matter in this world. Spiritual blindness is an effect of skepticism, and its antidote is the adoption of child-like faith.