Make the faith thick and the Church expensive 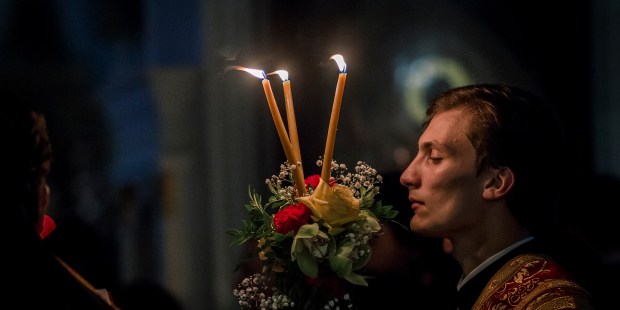 If people find it in the bargain bin, they’ll treat it as a bargain.

This should worry us. A major Jewish sociologist reports that “non-Orthodox Jewish trend lines resemble the trend lines for American Catholics and Mainline Protestants.” Hebrew Union College’s Steven M. Cohen then explains: “They’re all marked by declining adherents and participation.”

He also found that among the non-Orthodox, participation in Jewish enterprises had shrunk greatly from the “grandparent” (56-73) to the “parent” generation (28-45). Membership in a congregation drops about half, for example. It will be even lower among the young.

Orthodoxy is the most traditional form of Judaism and the most concerned for the careful observance of the Law as traditionally understood. It’s also much like Catholicism: It gives you a life to live, and assumes that you probably don’t “get it” naturally but that you will eventually get it through practice. It asks for a deep immersion in the traditions, which it believes life-giving, not restrictive. It offers a whole way of living a life in the world directed to God.

The other movements, not as much. Conservative Judaism is roughly like the mainline Protestant bodies, groups with somewhat flexible doctrinal commitments and optional moral requirements. Reform resembles the most liberal wing of those bodies and Reconstructionism the Unitarians.

Here is what I think most useful for us: what shrewd, observant Jewish thinkers say in response. The typical Christian response when faced with such losses is to put the faith on sale. The leadership tries to make it easier to live. They make it thinner and lighter in the hope that more people will keep carrying it and some new people will pick it up.

That fails. People value the faith at the price the leadership sets. If they find it in the bargain bin, they’ll treat it as a bargain. They won’t value it as if it were a pearl of great price. Our Jewish brethren give us a better answer.

Intermarriage is only a symptom, he says. “Many Jews marry non-Jews because Judaism is no longer the primary — or, even a significant — animating narrative of their life. Judaism no longer provides the vocabulary that gives shape and expression to their commitments; it is not their first, second, or even third language.”

Held, a noted scholar and one of Newsweek’s fifty most influential rabbis, calls for “Judaic thickness,” that is a “deeper commitment to Torah and mitzvoth” (God’s law and commands). Meaning, he says, deep education: the non-Orthodox “need to bet the house on education — not on paper-thin slogans and catchwords, but on real, deep, substantive engagement with the texts and traditions of the Jewish people. The best way to confront intermarriage, in other words, is to talk about intermarriage less, and about Torah more.”

The political columnist Bethany Mandel, a convert to Orthodox Judaism, writes that Orthodoxy looks to external requirements, while in the rest of Judaism, “feelings reign.” For the other movements, for example, keeping Shabbat (the Sabbath) “might mean family time together doing anything,” not following the rules for the observance.

If those other forms are to survive, she believes, they have to become like the Orthodox. The young learn from the old to follow their feelings, and they feel differently. “When one’s religious faith is guided by feelings, is it any wonder that, upon maturation, that religion’s adherents follow their hearts instead of the strictures of their community regarding whom they marry and how they spend their free time?”

Rabbi Avi Shafran notes that the Orthodox birth rate is 4.1 children per family, the non-Orthodox rate well below the 2.1 replacement rate. The Orthodox “live for their progeny, work for them, guide them, pray for them.”

“The child-heavy Orthodox demographic reflects deep dedication to the future,” he writes. “In keeping with the Jewish religious tradition’s essential ideals, Orthodox Jews place children (theirs and those of others) on the hierarchy of priorities above — high above — career, economic success, status symbols and comfort. To be sure, there are wealthy Orthodox families. But there are many, many more that, without regret, live simple lives, and see kids as riches.”

In a phrase: Don’t put the faith on sale. Raise the price, because it’s worth it, and people who see what it is will gladly pay the price.