My son didn’t even go to Christmas Mass this year 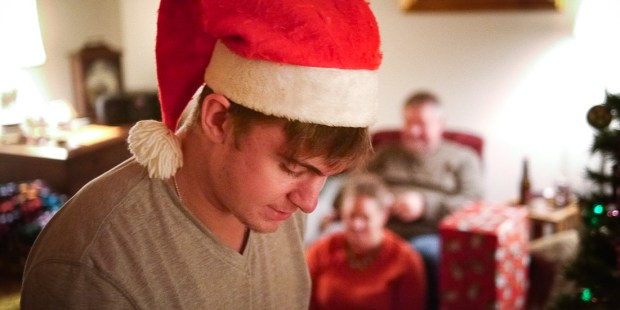 …and I’ll just keep right on praying and sacrificing for him.

Last year my now 22-year-old son came with us to Christmas Mass.  He hadn’t been going to weekly Mass in a couple of years — at least since early college — but at least he came for Christmas.

I remember praying, “Please Lord prompt him to come back to church regularly.”

This year, he didn’t go. Big time disappointment. (What about that prayer, God?  I reiterated it a few hundred times since last Christmas!)

I’ve been praying and sacrificing for him, and occasionally sending him an article or video I thought might help.

There was the one about an MLB baseball player (my son loves baseball) who’d been away from church for years, and had just recently come back. The video was an interview with him about how and why, and the difference it’s made in his life. (Wow, this one’s gotta affect my son!)

There was the article I sent him about a young man who couldn’t have been farther away from church — into drugs, stealing, immoral living, mocking Catholicism, all before a dramatic conversion that took him on a journey to becoming a priest! (Who wouldn’t be impressed by this amazing story! Plus it’s only a few paragraphs..maybe he’ll read the whole thing!)

I sent him research on young adults who are regular church-goers and how much happier and healthier they are, and more likely to have permanent relationships including marriage. They’re less depressed, less likely to use drugs or alcohol, have far more meaning in their lives, give their time, talent, and treasure to others more often, are better able to withstand life’s trials, and are more involved with their families than non-church goers. (This is impressive stuff! Surely it’ll make sense to my son!)

I sent him a beautiful video of Vince Lombardi, famous football coach (my son likes football too), about the centrality of the Catholic faith in his life.

I found some great stuff on www.CatholicsComeHome.com and printed off a few things for him.

It all went into a black hole.

Read more: We did everything right, but our son still left the church…

When I’d ask, “Oh, did you get chance to take a look at that article I sent you?” he’d usually respond, “What? Oh, yeah I saw the title, but I haven’t looked at it yet.”

Another time, “Not yet Mom.” And sometimes I got a not-so-subtle hint, “Ma I’m not really interested in that stuff so really it’s just a waste of time sending it.”

I could lie on the couch and analyze how it’s possible that my son has gone to Catholic schools his entire life, from kindergarten through college, and now says none of it means anything to him.

“If I don’t believe it, what’s the point of going to church and pretending I do?” is what I heard this Christmas.

We’re told not to give into despair during those times when things don’t make sense and our seemingly worthy prayers aren’t answered — at least not in the way we’re hoping.  So I’m refusing to despair, and I’m refusing to think this is a permanent “non-church goer” status for my son, and I’ll just keep right on praying and sacrificing for him, along with so many other parents longing for their adult children to come back to the Church.

My son has the foundation of a Catholic upbringing.  He has the Holy Spirit, present within him since his confirmation. And he has his mom praying for him!  St. Monica prayed for her son Augustine — not just for a little while, but for decades. If that’s what it takes, I’ll do it, too. Perhaps it’s all part of both of our journeys.