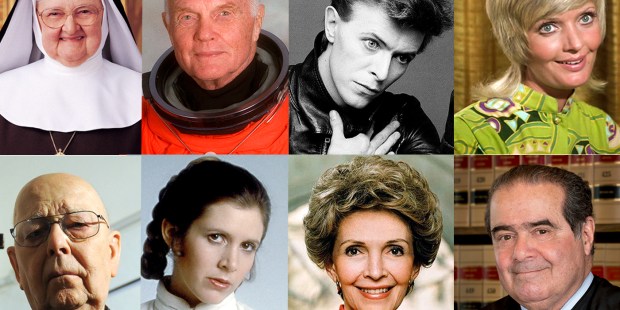 2016 was a year of surprises, few of them pleasant, and the writing of too many obituaries

The bitterness of November’s elections was enough to make us glad to see the end of 2016, but added to the grimness of the politics (or as Pope Francis suggested, the lack of politics) was an increase in terror activity that threatened to make the horrific seem routine, and what seemed to be an unusual number of prominent, impactful deaths, (both in and out of the Church) that have left us feeling a bit punch-drunk and disoriented.

As we look over the year, and remember so many lives come to an end, we are reminded of the Church’s invitation to pray for the dead, one of the spiritual works of mercy we spent so much time considering during the Jubilee that enveloped most of the year.

To pray for the dead, the pope tells us, “is, first and foremost, a sign of appreciation for the witness they have left us and the good that they have done.” It is, Francis suggested, “giving thanks to the Lord for having given them to us and for their love and their friendship.”

2016 had us saying good-bye to some last embers of remarkable moments in the Church’s history. The last of the Cristero soldiers who defended religious freedom against Mexico’s authoritarian regime passed to his eternal reward, Juan Daniel Macías Villegas.

A handful of heroes of the Church passed before us in 2016. Mother Angelica, of course, and Father Amorth, Rome’s famous exorcist. There was also Mark Zwick, who following in the footsteps of Dorothy Day, changed the lives of countless immigrants in the southern United States. Zwick had a kindred spirit in Helen Chavez, the wife of Cesar Chavez, who also died this year. We celebrated Mother Teresa’s canonization in 2016, and a man known as Pakistan’s Mother Teresa went to God. A priest who followed in the footsteps of saints also passed: the prelate of Opus Dei, Bishop Javier Echevarria, who was the third to govern that religious family, after the saint-founder and his beatified first successor. And then there was the priest who made Apple more beautiful.

The world’s oldest bishop and the United States’ oldest priest both died this year. And Cardinal Loris Capovilla, John XXIII’s personal secretary, passed away, and with him, a precious link to the Good Pope and the vision he had in calling the Second Vatican Council.

There were also the heroes of the Church who met their death with the crown of martyrdom. We won’t soon forget the testimony of Father Jacques Hamel but there were also the four Missionaries of Charity killed in Yemen.

The summer of 2016 will be unforgettable for the thousands of youth who made it to Poland for the experience of World Youth Day. One of the young people behind the scenes in organizing the event didn’t actually make it to see the pope, but he undoubtedly had a chance to watch from eternity.

It seems the list of celebrities who said good-bye was also relentless. We thought we’d seen enough of death for one year, but news of Princess Leia’s passing came with only a few days left in December, followed almost immediately by the announcement that her mom, Debbie Reynolds, had died of a stroke just a day after her daughter’s passing. Before the two of them, of course, we had Florence Henderson, Leonard Cohen, Harper Lee, Jack Chick, Prince, and David Bowie, among so many others.

John Glenn, Nancy Reagan, and Justice Antonin Scalia left their marks on our world; 2016 meant saying good-bye to them too.

The march of evil

Statisticians tell us that we’ve seen worse eras of terrorism, but nevertheless, there is a sense that we’ll wake up tomorrow to find news that some part of the world is suffering again from an attack.

In fact, the number of terrorist attacks in 2016 is far too numerous to recap. Some areas of the world have endured dozens of massacres in these 12 months, even if we rarely hear about them on the news.

But let us recall two in March: Brussels, Belgium, on the 22nd, when two suicide bombings at the airport and another bombing at a metro station resulted in the death of 32 people and left some 300 wounded.

Only days later, there was the horrific Easter massacre in Pakistan, when a splinter group of the Taliban detonated a bomb at a park, meaning that a large number of the 69 dead and more than 340 wounded were women and children.

The summer was bloody as well, with the Orlando tragedy in June, when a shooter at a gay bar killed 49 people and wounded 53 others, bringing us to turn to the archangels in prayer.

The next month came the horror of Bastille Day in Nice, with 86 people killed and more than 400 wounded by a truck driven purposefully and recklessly into the celebrating crowd.

We’ve finished 2016 with terror as well. Women and children were the target of the Dec. 11 attack at the Coptic Cathedral in Cairo, with two dozen killed and nearly 50 wounded.

Just a week later, it was another truck driven into a crowd, this time at a Christmas market in Berlin, leaving 12 dead and another 56 injured.

In the midst of all that, we in the United States contemplated a different kind of horror, with the shootings and violent protests surrounding the issue of police and race relations.

And it would seem amiss to list sorrows of 2016 without giving a mention to the plight of refugees this year, as so many hundreds have lost their lives trying to make a better life for themselves and their children.

Yet most of 2016 was nestled in the Year of Mercy. Let us trust and pray that in God’s mercy, he has welcomed the dead into his embrace, and that with his mercy, he has, as John Paul II understood it, placed a limit on the reach of darkness into our world, sparing us from yet greater evils.

and let perpetual light shine upon them.

May the souls of the faithful departed

through the mercy of God rest in peace.