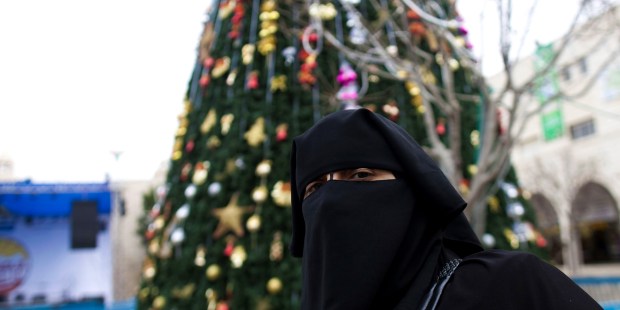 Everything is equal, all the time. It’s just the weight that is differently distributed.

A few years ago, my husband, sitting across the table at breakfast, pointed to a lovely photograph in the Wall Street Journal: under a heading, “In Detroit, Christmas Means Volunteering for Many Jews, Muslims” was an image of two women, one wearing hijab, working together in the kitchen of Congregation Beth Shalom, to feed the homeless on Christmas Day.

The article was not online but there are other sources telling the story.

The press is so frequently negative about religion, particularly about relations between religions, and specifically about Muslims and Jews, that it’s really heartening to read such stories.

Having promised to remember several friends before the Christmas crèche after our “Midnight” Mass, I stood pondering the scene. My attention was drawn to Mary and the Infant, and I felt powerfully compelled to pray for some “mothers-and-sons” of my acquaintance, particularly for mothers I know who are raising, with great care and courage, developmentally challenged sons, and for whom every day is a bittersweet question, “which mode will we see today, ‘meltdown’ or ‘mild’?  These are moms who say their prayers in the morning, and throughout the day, and at night, always with questions at the back of their minds:

“Who will love this boy for me, and for himself, when I am not here?”

“Who will see the sweetness of this boy-man, that is so obvious to me, but hidden to others?”

“What happens when he is older and stronger, and perhaps needs more than I can physically give?”

Praying for these mothers and sons by name, it was only later that I realized, I’d prayed for Muslim and Jewish mothers and sons, and agnostics and Evangelicals. I had placed them — all outside of time — before the Infant we call the One, the Word, the Wonder-Counselor, and before his Mother, who gave him her flesh and blood, and who would — forever and ever, science says — retain within her being (and within her very brain!) the microscopic bits of himself, and therefore his Divinity. As the mother of sons, I stood before this Mother-of-all-Mothers, and this Son-of-all-Sons and prayed for all-mothers, all-sons.

And I didn’t even realize I’d made a multi-faith Mitzvah, asking the prayers of the Greatest Mother, for the intentions of all the mothers, the help of all the son; asking the blessing of the Holy Son, upon all of the sons…and the mothers.

When he’d read the story of Jewish and Muslim folks making sandwiches for the homeless, my husband had made a point of mentioning that the story was illustrated with two women, to which I had shrugged and said, “well, that’s what women do, they go into the kitchen and make the tuna sandwiches for the hungry.”

In this hyper-PC year of 2016, I’m sure someone would say so, but the truth is, this is still what women do. Men and women are equal in dignity and responsibility, but they are also different, and amid them parents — even spiritual parents — are more different, still. They live under a kind of Sword of Damocles, knowing that at some point, their hearts will experience the thrust of a spear-tipped sorrow that wounds us to our core, on behalf of our children. Even in shared parenting, shared joy, shared grief, men and women cannot help but be different, and some of that may well be because of the lifelong, atomic connection between a mother and her children.

For women, our children’s lives are literally within our hearts and heads.

There is that old saying, “a daughter is a daughter all of her life, but a son is a son until he takes a wife.” It’s true. When a daughter marries and has children of her own, she is first a wife-and-mother, but some part of her comes back to her mother — they begin to share an understanding specific to the role. When a son marries, he is quite justly first a bridegroom — and a father — and his sonship is subordinate to all of that.

Happily, a fine daughter-in-law helps bridge that separation. But between sons and daughters and mothers, it is still different.

Everything is equal, all the time. It’s just the weight that is differently distributed.

God’s blessings upon all parents, but by the light shining upon a desolate cave, perhaps especially upon all Mothers — of every religion, or of no religion at all — and the children they carry within them, forever.