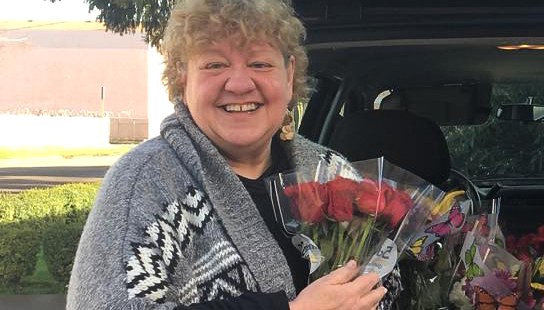 Brightening spirits in the northwest bloom by bloom

Woodeene Koenig-Bricker was standing in line at a local store in Eugene, Oregon, thinking about her bills and finding more work when she spotted some flowers. I wonder what they do with the flowers that are too old to sell? the writer and editor wondered. While she normally ignores such random thoughts, this time she walked over and asked the florist what they did with the old flowers.

“She blinked at me and said, ‘Um, we throw them out or sell at a deep discount.’ And purely on impulse, I asked, ‘Would you sell them to me if I gave them away?’”

Koenig-Bricker left her name and number, figuring she would never hear from the woman again, but the next day the phone rang. “I have flowers if you want them,” said the florist. Ignoring the balance in her checking account, Koenig-Bricker went back to the store. The florist brought out a huge cartload of flowers and said that she was willing to sell them for a dollar a bunch.

“I’ve taken some flower-arranging classes and knew that was an amazing deal, so I said I would take them all. She said the company she worked for couldn’t give them away — “I’m assuming it’s for the same reason grocery stores can’t give away food,” says Koenig-Bricker. “There probably are other places and other florists that might be able to donate them, but this was all happening in less than 24 hours, and I hadn’t really given this any planning or thought, so I was just taking the next step … I took the flowers and began giving them away.”

Koenig-Bricker began bringing bouquets to doctors’ offices, women’s care centers, nursing homes, fire stations and other places where people might need a lift, introducing herself as the “Flower Fairy Godmother.”

“I’ve always loved flowers and fairies  —  ‘Flower Fairy Godmother’ seemed right,” says Koenig-Bricker. “Also, I really don’t need or want people to know who I am  —  just that there’s [someone] out there who’s trying to bring a little light to an often dark and painful world.”

It takes her most of an afternoon to give away the flowers. She drives to the various locations, usually speaks with a manager about what she’s doing and then hands over the flowers. Only three weeks into it, the response has been tremendous.

“People are gobsmacked. They just stand there with their mouths agape, looking at me,” she says.

When she took the flowers to a doctor’s office, she told the doctor to give a bunch to the person he had to give the hardest news to the next day.

“He blinked and said, ‘I can do that.’ He then just stared as I walked out,” recalls Koenig-Bricker.

“I also took them to a fire station and told the guys to take home a bunch … one guy grabbed a bunch so fast it just made me laugh. He said, ‘I can always use flowers to make points!’”

Koenig-Bricker quickly realized how much she wanted to give flowers out every week, but even at a dollar a bunch, the cost of the flowers, plus vases, gas and her time, meant she wasn’t sure how to keep it going. A friend suggested a GoFundMe page.

“At first I was very resistant because I had grown up believing that you never ever, under any circumstances, take anything from anyone. But again, I acted on impulse and decided to see what would happen.”

As of this writing, more than $1,00o has been raised. Koenig-Bricker set up a bank account so all donations will be separate from her personal funds.

“I think that’s very important. I want people to know this isn’t a personal funding venture, but that everything I’m given will be used to give away flowers. That’s the whole idea — to bring a little light to those who might welcome it.”

Koenig-Bricker plans to get business cards and just launched the Flower Fairy Godmother blog so people can follow her adventures.

Koenig-Bricker says she seems to have been catapulted into something bigger than herself, and the whole thing is “a bit scary” since she’s not used to acting on what she calls “simply listening to my intuition the moment.” Does she believe this was an inspiration of the Holy Spirit?

“It wasn’t like I had the feeling that the Holy Spirit was somehow whispering in my ear and it was a prayer-filled moment,” says Koenig-Bricker. “It was more like a small stirring and the sense that I needed to trust my intuition on this one. I know, however, that I wouldn’t have acted on it left to my own devices, so in that sense, yes, I’m sure that the Spirit was nudging me. It has felt like a totally grace-filled, Spirit-motivated activity.”

As for whether she considers Flower Fairy Godmother a ministry, she said she sees it first and foremost as a passion.

“Not in the sense that one can be passionate about Alan Rickman films or passionate about football, but as in something that resonates deep in the soul and creates a deep sense of ‘this is right for me, right now,’” she says. “I do believe that real life-changing ministry … has to come from that deep seat of passion. … This is something that brings me joy and allows me to spread joy.”

And why flowers, exactly?

“Who doesn’t love flowers?” she asks. “If you’re happy or sad, worried or elated, up or down, flowers just make it better. They’re a sign of the goodness and beauty that exists in the world, even when we might not be feeling it at the moment. There is great power in flowers.”