Reflection for the Solemnity of Mary, Mother of God 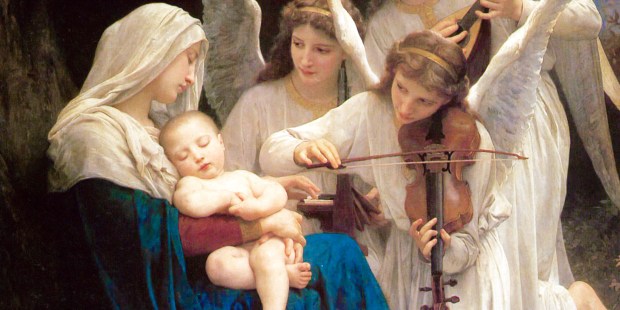 As we celebrate this great feast of the Mother of God, we are ultimately being asked to join Mary in contemplating the gift of her Son, allowing the grace of these holy days to change us.

To call Mary the Theotokos, the “God-Bearer,” is to celebrate the unique role that she has played—and continues to play—in God’s plan of salvation. And as we honor the Theotokos in our celebration of the Solemnity of Mary, Mother of God, on January 1, we also celebrate the Octave Day of Christmas, recalling the circumcision and naming of Jesus on the eighth day after his birth (cf. Luke 2:21).

The iconic Christmas image of Mary holding her infant Son embodies the mystery of the Lord’s birth, as it brings together the human and divine elements of the Incarnation. And yet, in honoring Mary as the Mother of God, we are also invited to consider another image: the Mother cradling the body of her murdered Son. The same arms which held the Prince of Peace in a stable in Bethlehem received body of the crucified Savior of the world on a hill outside of Jerusalem. The Son of this Mother is the true source of peace among nations, within families and communities, and in the deepest recesses of our hearts.

As I reflect on this mystery, I’m reminded of the words of my favorite Christmas carol:

When Mary birthed Jesus ‘twas in a cow’s stall,
With wise men and farmers and shepherds and all.
But high from God’s heaven a star’s light did fall,
And the promise of ages it then did recall.

If Jesus had wanted for any wee thing,
A star in the sky, or a bird on the wing,
Or all of God’s angels in heav’n for to sing,
He surely could have had it, ‘cause he was the King.

For me, the words of this carol—adapted by John Jacob Niles from an Appalachian folk song—help to break open the full meaning of Christmas: the gift of a Savior, fulfilling the promises that God had made to our ancestors. They also challenge us to remember that in celebrating the Incarnation at Christmas, we are also celebrating the full life of Christ, including his Passion, Death, and Resurrection.

In his Message for the World Day of Peace (also observed on January 1), Pope Francis speaks of the violence that plagues the world today: “Jesus himself lived in violent times. Yet he taught that the true battlefield, where violence and peace meet, is the human heart.” And it was in the depths of her heart that Mary contemplated everything that was happening to her and her Son. She maintained this contemplative stance throughout her life and she found peace in her contemplation and prayer. And, as Sister Barbara Reid, O.P., has reflected, “A fundamental attitude for bringing to birth God’s dream of peace for us is to live like Mary, in contemplative wonder, dwelling in mystery, trusting in the ways of the Holy One” (from Abiding Word: Year A).

As we celebrate this great feast of the Mother of God, we are ultimately being asked to join Mary in contemplating the gift of her Son and allowing the grace of these holy days to change us, so that the Prince of Peace may reign in our hearts and in our world.

How does the example of Mary invite you to reflect on how God is at work in your life?

How does the full life of Jesus, including his sacrifice on the Cross, help shape your celebration of Christmas?

What can steps can you take to help make “God’s dream for peace” more of a reality in your home and community?

A Prayer for Peace –

Mother,
you who know what it means
to clasp in your arms the dead body of your Son,
of him to whom you gave birth,
spare all mothers on this earth
the death of their sons,
the torments, the slavery, the destruction of war,
the persecutions, the concentration camps,
the prisons!
Keep for them the joy of birth,
of sustenance, of the development of man
and of his life.
In the name of this life,
in the name of the birth of the Lord,
implore with us peace,
and justice in the world!
Mother of Peace,
in all the beauty and majesty of your motherhood,
which the Church exalts and the world admires,
we pray to you:
Be with us at every moment!
Let this New Year be a year of peace,
in virtue of the birth and the death of your Son! Amen.